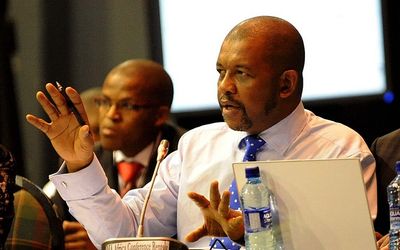 EFF national chairperson Dali Mpofu has ordered University of the Witwatersrand vice chancellor Adama Habib to personally address students within the next two to three days.

Mpofu addressed hundreds of students late Tuesday afternoon after marching along with them to demand the release of two students who were arrested in the morning.

“We have been saying to him he must come and talk to you as students [and] not through the media‚ but directly. Your parents have entrusted you to him‚ he is now the parent‚” said Mpofu.

The EFF leader said he’d be engaging with Habib on the 11th floor of Solomon Mahlangu House‚ along with former Black Student Societies (BSS) presidents‚ including professor Firoz Chachalia who was the first president of the BSS in 1980.

The BSS were elected bodies aimed at representing the specific interests of black students who at the time‚ due to apartheid policies‚ constituted an artificial minority on campuses.

Mpofu said they would put two demands on the table: to personally address the students as well as shut the university.

“In the meantime‚ it cannot be business as usual and I don’t want to get into details as to what must happen because we emphasize that this is not our struggle‚ it is your struggle‚” added Mpofu.

He said he would inform student leaders about the outcome of the meeting with Habib.

Mpofu spent most of Tuesday on campus as a large group of students engaged in running battles with police leaving several people injured‚ including students‚ a lecturer‚ journalists and police.

The EFF national chairman said he had intervened in the chaos not in his official capacity‚ but as a concerned parent.

“The key issue is that we must all try and save the academic year and on that we are all 100% agreed‚” he told radio 702 (www.702.co.za) in an interview on Tuesday afternoon‚ adding that he was on his way to meet vice-chancellor‚ Professor Adam Habib‚ with several proposals made by student leaders.

Sounding confident that parties would find each other‚ he said: “After our meeting with Prof Habib and others‚ we will speak to the students and I think later tonight or in the morning‚ there will be some broad consensus of what should happen in the next 48 hours“.

This‚ he said‚ would lead to a situation where‚ “hopefully‚ there will be compromises that we will be asking for on both sides which can lead up to arresting the situation and ensuring that there is a moratorium on violence on both sides of the divide“.

Habib reacted on air by saying that he welcomed the window of opportunity to reach some form of negotiated settlement‚ adding that his main concern was seeing 37 000 students pass and graduate.