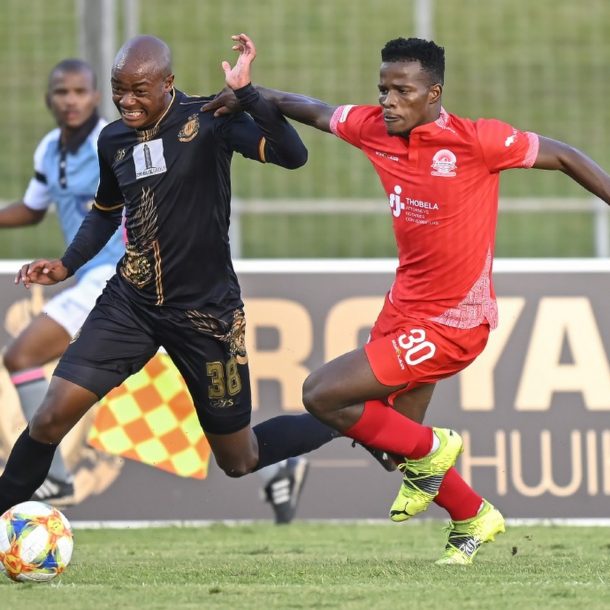 The start of the Premier Soccer League’s (PSL) relegation/promotion playoffs on Tuesday and the coming Dstv premiership season are under threat after lower tier side Royal AM filed an application to stop the games from commencing as planned.

Royal AM boss Shauwn Mkhize wants the PSL to postpone Tuesday’s matches and the start of the new topflight 2021-22 season to accommodate an urgent application she has filed to Gauteng deputy judge president Roland Sutherland.

The deputy judge president issued an order at the weekend dismissing the application brought by Polokwane City to review the arbitration award given by advocate Hilton Epstein on May 19‚ 2021‚ a decision that saw Sekhukhune declared as GladAfrica Championship winners.

Mkhize has asked Sutherland to allow her club to take the matter to the Supreme Court of Appeal in Bloemfontein and wants this to be done before the end of the day on Monday.

The PSL’s response through lawyers Webber Wentzel said‚ among other things:

“Our client (the PSL) does not intend to deal with all the allegations in your letter. Our client’s omission to do should not be construed as an omission or waiver of any kind.

“Our instructions are that the play-offs will proceed as advised in the attached circulars. Royal AM is advised to comply with all of the pre-match requirements and to play in the matches as scheduled. If Royal AM fails to appear for the matches‚ any harm it suffers‚ in accordance with the provisions of the NSL Handbook‚ will be harm of Royal AM’s own making.

“The NSL did its level best‚ even beyond the bounds of what is reasonable in the circumstances‚ to have the disputes regarding the Epstein and Cassim awards heard by the High Court – and made it clear at all stages that the play-offs must begin‚ at the latest‚ on 15 June 2021. The Deputy Judge President also went to extraordinary efforts to accommodate the hearing and to hand down an order the very next day.

“The PSL will oppose any application your client seeks to bring and will ask for a punitive costs order against your client.”

In the application seen by TimesLIVE‚ Mkhize wrote on page 26 of 28 pages of the urgency of her appeal and said the matter had to be resolved before the commencement of the promotion/relegation play-offs.

“The legal question whether the Award is lawful or unlawful had to be resolved before the play-offs as that was what was required to in order to determine which team would rightfully automatically be promoted to the DStv Premiership.

“Royal AM launches this application on an extremely urgent basis and will seek to have the matter heard on Monday 14 June 2021 before the play-offs start the following day‚” she added on Page 27 of her application.

Monday’s events came two days after Polokwane City’s application to the Johannesburg high court to have an arbitration overturned that deducted three points from the side and awarded them to Sekhukhune was dismissed.

Having heard counsel on behalf of all parties on Friday‚ Sutherland on Saturday issued an order dismissing the application brought by Polokwane City to review the arbitration award given by Epstein.

Sutherland also ordered that costs incurred by Sekhukhune be borne by Polokwane City and Royal AM jointly and severally‚ the one paying the other to be absolved.

The PSL and the SA Football Association (Safa) are to bear their own costs.

“The consequences is [sic] that Sekhukhune United have automatic promotion to the Premiership for next season while Chippa United‚ Royal AM and Richards Bay will contest the promotion/relegation play-offs which will commence on the 15th of June 2021‚” the league said in the statement.

But after studying Sutherland’s order and in consultation with her lawyers‚ Mkhize‚ whose club is based in Durban‚ sent an urgent application to Sutherland seeking him to allow her to appeal as she felt that Royal AM have the prospect of getting a decision that will favour them.

“My legal representatives had indeed confirmed the view that Honourable Sutherland DJP has erred in arriving at his order and that there were overwhelming prospects that another court would arrive at a different conclusion‚” Mkhize wrote in her application to Sutherland seen by TimesLIVE.

Mkhize said she communicated her intent to appeal to the PSL on Sunday.

“At about 5pm on Sunday 13 2021 the NSL’s attorneys sent a letter to Royal AM’s attorneys in which it refused to give an undertaking sought and indicated that it would oppose this application.”

The legal drama is playing out just hours before Royal AM face Richards Bay United in the relegation/promotion playoffs at the Umhlathuze Stadium in Richards Bay on Tuesday.

In her application under the headline The Interdictory Relief on Page 16‚ Mkhize wants the PSL to postpone the play-offs and the start of the 2021-22 season.