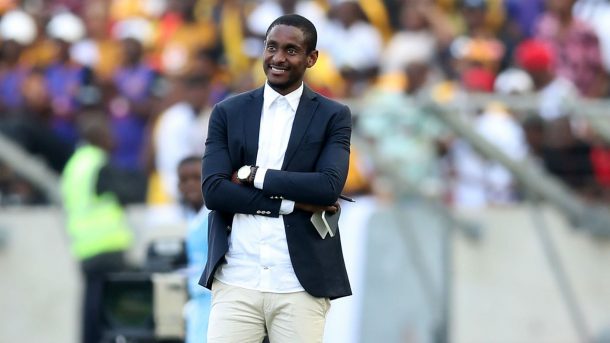 Mokwena on Motsepe: he wants Mamelodi Sundowns to be the best club on the African continent

Rulani Mokwena says the ambition being back at Mamelodi Sundowns remains the same as when he left the club in 2017 – the pursuit of what some may call the “impossible dream” of being the best team in Africa.

Mokwena returned as assistant to head coach Pitso Mosimane at Sundowns late last week after an absence of three years‚ having been poached by Soweto rivals Orlando Pirates in August 2017.

He takes his place again alongside Downs’ other assistant‚ Manqoba Mngqithi. The 33-year-old coaching prodigy was asked what targets he expects the coaching staff will be asked to fill on his return.

“Well it’s a very simple thing. They say teamwork makes the dream work. And the dream that we have is known by many‚” Mokwena said.

“It’s a dream that is led by the ambition of the president‚ who supports us in saying he wants the club to be the best not just in South Africa‚ he wants Mamelodi Sundowns to be the best club on the African continent.

“The dream is driven by the appetite and the relentless pursuit that the head coach possesses. His drive‚ his hard work‚ and his pursuit of excellence are what push the dream.

“And moreover the quality of the players is what helps us to work towards achieving the dream.

“But it wouldn’t be anything without the magnitude of the loyal supporters who dream the same dream‚ speak the same language and have the same desire to support a club who they want to see being the best in Africa.

“And mine is just to continue to serve and play my part in pursuing of what many would call an impossible dream.”

After being part of Sundowns’ 2016 Caf Champions League-winning technical staff‚ Mokwena joined Pirates as an assistant in August 2017.

This season he served a spell as Bucs’ caretaker-coach before being loaned for a game as head coach of Chippa United in March. The 33-year-old coaching prodigy was released by Chippa and Pirates last month.

Sundowns are in a training camp in Rustenburg in anticipation of the return of the Absa Premiership‚ which was suspended on March 16 due to the coronavirus.

The Premiership and Nedbank Cup semifinals will be completed in a single-city‚ biologically safe environment behind closed doors‚ the details of which are being ironed out by the Premier Soccer League and SA Football Association.