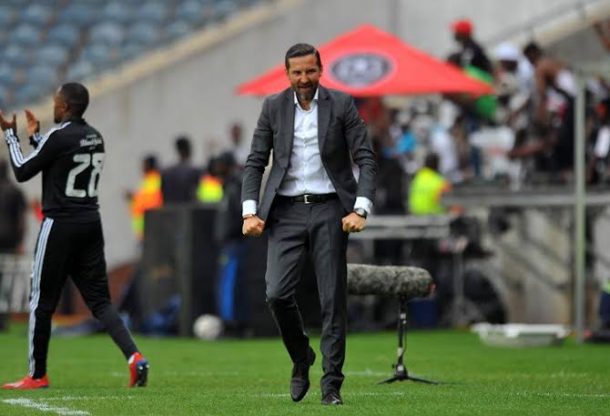 Frank ‘Gabadinho’ Mhango’s quest to finish the season as the top scorer is not a priority at Orlando Pirates‚ says coach Joe Zinnbauer.

Mhango is the frontrunner in the race for the Golden Boot with 14 goals in the league this season‚ but his lead was cut at the weekend as both Bradley Grobler of SuperSport United and Bongi Ntuli of AmaZulu scored in their respective games.

Mhango has not scored in his last three outings since the 2-1 win at Chippa United at the start of February but Zinnbauer said the race to finish as the league’s top scorer was not a priority as far as Pirates were concerned.

“For me that’s not important. I’m happy when Gabba scores and when he makes goals but for me the most important is the focus on the team.

“There are a lot of games left where he can score. I hope he will score in our next game against Sundowns‚ but we have other players who can score too.”

Mhango struggled at the weekend as Lamontville Golden `Arrows defended stoutly against him‚ giving him little room to manoeuvre and subjected him to a series of niggly fouls.

He quickly became irritated by it all and was replaced for the final 15 minutes of Saturday’s goalless draw at the Sugar Ray Xulu Stadium.

Tshegofatso Mabasa‚ who replaced him‚ has six goals in the league and is Pirates’ second highest scorer.

Last season’s winner of the Lesley Manyathela Golden Boot award was Mwape Musonda of Black Leopards‚ who finished the season with 16 goals – the highest tally in five years.