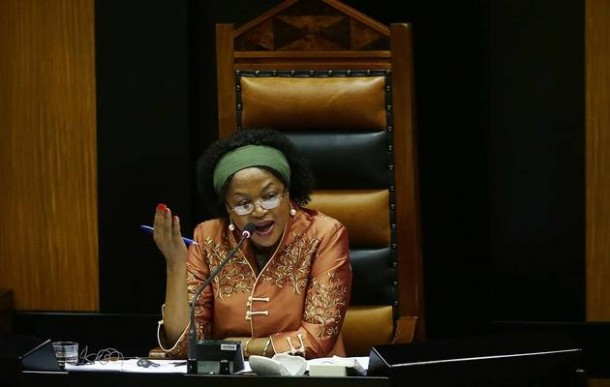 On Tuesday afternoon on the steps of Parliament‚ Speaker Baleka Mbete‚ flanked by National Council of Provinces chair Thandi Modise‚ announced at the annual State of the Nation Address (SONA) would be postponed.

Here is her full statement:

The State of the Nation Address (SONA) is an important occasion in the national political programme of Parliament.

We have been dismayed in the past four years at the disruption‚ anarchy and chaos that have been characteristic of the this annual joint sitting which in some way marks the opening of Parliament.

Reporting through Parliament on the State of the Nation is a critical accountability action by the Executive‚ and it must happen. Developments this year‚ particularly the calls for disruption and/or postponement of the joint sitting‚ have therefore caused us great concern.

We have regrettably come to the conclusion that there is little likelihood of an uneventful joint sitting of Parliament this coming Thursday.

With this in mind‚ we decided to approach the President of the Republic to propose that we postpone the joint sitting in order to create room for establishing a much more conducive political atmosphere in Parliament. When we met the President‚ we then learnt that he was already writing to Parliament to ask for the postponement of SONA.

This postponement has taken into account the scheduled tabling of the national budget in the next two weeks.

We wish to assure fellow South Africans and everyone affected by this decision that these actions are being taken in the best interests of Parliament and the country.

A new date for the State of the Nation Address will be announced soon.