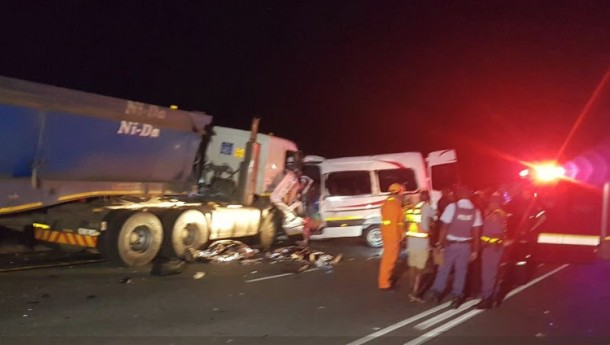 Mass memorial planned after 15 killed in horror crash on N4

Officials are planning to conduct a mass memorial for some of the 15 people killed in a multi-vehicle crash on the N4 near Matsulu‚ between Mbombela and Malelane in Mpumalanga‚ on Friday night.

“The appointed task team is expected to look into the possibility of arranging mass memorial and funeral services for the Nkomazi victims‚” said Joseph Mabuza‚ spokesman for the provincial community safety department‚ on Monday.

The majority of those killed were from the Nkomazi area.

“Nkomazi local mayor Johan Mkhatshwa will [on Monday] visit 12 of the families of the crash victims who perished in the horrific crash‚” said Mabuza.

“The entourage will meet at Kamhlushwa Community Hall before embarking on the programme. They will pay homage to families individually as part of offering support and offering condolences to these families.”

Mabuza added that the deadly crash “happened when one of the drivers attempted to overtake another vehicle”.

One of the victims is said to be from Bushbuckridge‚ while another is from Middelburg.

Of the 15 people killed‚ 14 have already been identified. Authorities are still trying to determine the identity of the last victim.