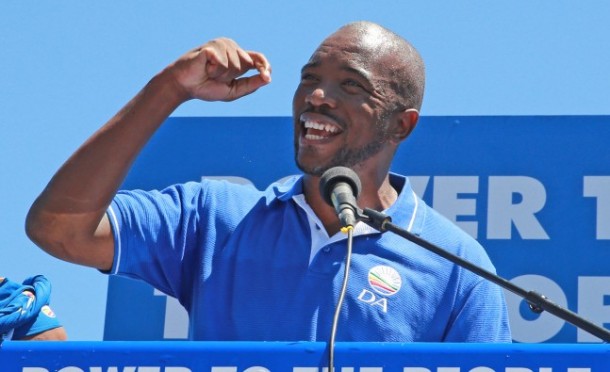 Maimane lashes out at ANC veterans for ‘double standards

Addressing a crowd of no more than 100 people‚ Maimane said the ANC was contradicting itself.

“I support President Mbeki. He must not campaign for a parasitic ignoble organisation‚ said Maimane.

“I don’t understand Mavuso Msimang [and other stalwarts] who are busy doing door to door campaigns for the ruling party.

“Last year they were busy saying ‘Zuma must fall’ and now they are campaigning that he [Zuma] must grow. How do you trust people like that?” asked the DA leader‚ who was flanked by Tshwane mayoral candidate Solly Msimang.

The poster‚ which reads “Honour Madiba’s Dream. Vote DA”‚ was unveiled by Maimane and Msimanga.

The leader said the poster resembles what the first democratic president Nelson Mandela stood for.

“That is why we acknowledge when we say celebrate the legacy of Madiba‚ we are not saying he belongs here or there.

“We are saying his values of freedom‚ constitutionalism‚ understanding of addressing historical legacy is something we will continue to fight for‚” said Maimane.