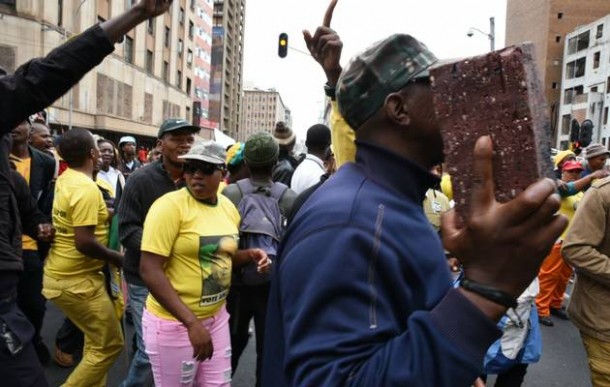 Luthuli House protesters arm themselves with bricks – ‘Not in our name’: ANC

South Africa’s ruling party on Friday condemned protesters arming themselves at a protest outside its headquarters.

“We condemn in the harshest possible terms reports of people seeking to take up arms in the name of the ANC‚” the African National Congress said in a statement on its official Twitter account.

“The ANC has not organized any march. We urge those gathered at #LuthuliHouse to exercise maximum restraint and discipline.” Some of the protesters are arming themselves with bricks while others affiliated with the MK veterans are marching in formation. A group of three white protesters joining to campaign for President Jacob Zuma to resign were escorted away by police when they tried to picket nearby‚ according to various media reports on Twitter.

Calling for protesters to gather a calm and measured fashion‚ the ANC reiterated: “ANC distances itself from and has not organized any marches to its headquarters‚ Luthuli House‚ whether in protest or in its defence”.

The ANC said it encouraged “all South Africans to report any incidents of illegality‚ intimidation or coercion to the relevant law enforcement authorities”.

“We should not allow inflammatory rhetoric from certain elements to damage our fragile social fabric and turn South Africans against each other.”