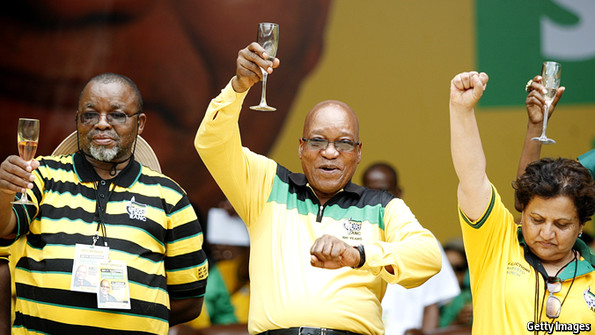 The Gauteng Liquor Board is allowing the bars to stay open longer for the ANC’s January 8 birthday celebrations in Soweto – and protestations by the party that the concession is not favouritism have been met with scepticism by tourism groups and opposition political parties.

But the board insisted yesterday that the decision to relax the liquor laws this weekend – for the first time since they came into force in 2003 – was not in compliance with a ruling party directive.

The board, part of the Gauteng department of economic development, made the announcement yesterday, saying the trading hours for bars at the ANC bash would be relaxed from Friday to Sunday.

The department said thousands would be coming to Gauteng to celebrate the 105th anniversary of the ANC and the influx would be a boon to the tourism and hospitality industries.

The extension of bar trading hours is provided for in law but has not been invoked since 2003.

Applications for the extension of trading hours must be made at the board’s offices and a permit could cost up to R9000 for the three days.

Churchill Mrasi, president of the SA Leisure, Tourism and Hospitality Association, which represents tavern owners, said his organisation had not been told of the board’s decision.

“We are not against the move. What we do not understand is why it should only happen when the ANC is celebrating.

“The question is: Why is it a selective thing? This has never happened before,” he said.

Gauteng is one of the most visited provinces in the country, hosting major events such as the Soweto soccer derby and the Standard Bank Joy of Jazz festival.

No event has enjoyed the bonanza the ANC celebrations will enjoy.

But Fhedzisani Pandelani, the liquor board chairman, said that the move was not in compliance with an ANC directive.

“We are the licensing authority. We were not responding to just what the ANC requires. It is erroneous to say that this is geared towards the ANC. This is a resolution by the board itself, which says we need to respond to the demands of the market.

“It has never been done before. It is a jewel that has been kept in the cupboard.

“We needed to think out of the box because part of the reason we were appointed was to give leadership on issues of this nature.”

When asked about the board’s decision, national ANC spokesman Zizi Kodwa said: “It has nothing to do with us.”

The deputy chairman of the EFF in Gauteng, Mandisa Mashego, questioned the timing of the move.

“They want to encourage a lot of sales of alcohol and drunkenness at their rally and the MEC thinks it is important – what can we say?

“The MEC needs to do something long term about curbing the abuse of alcohol in society and regulating its sale.”

The DA spokesman for economic development, JaneT Semple, asked how the liquor board, which has struggled to issue licences on time, would be able to approve the day passes at such short notice.

“Some people can battle for months to get a liquor licence. Now all of a sudden the ANC is having a birthday and they will get their applications approved by Friday.”

The ANC’s conferences and celebrations are big-ticket affairs. Businesses were reportedly charged R5-million for access to a networking lounge at the ANC elective conference in Polokwane in 2007.