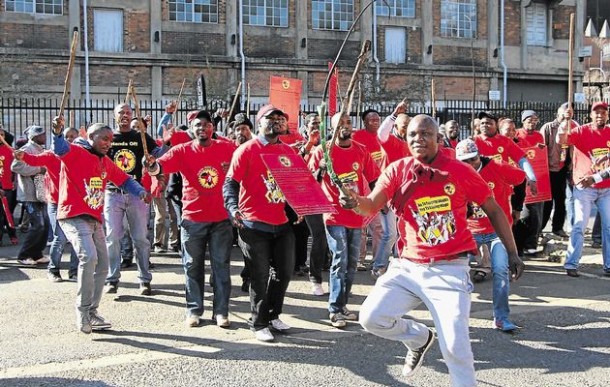 The National Union of Mineworkers, one of Cosatu’s biggest affiliates, has questioned the relevance of the SA Communist Party.

The embattled NUM, which was losing members in droves, is holding its central committee meeting ending today at the St George Hotel in Irene, Tshwane.

“The question we must ask is how relevant is the SACP in today’s political agenda. The party must protect the interest of the working people and lead them to economic emancipation,” Sipunzi said.

“Little is heard about its contribution in the public space. We must be honest here. The leadership of the party is in parliament when the party requires their leadership at all times.”

Former Cosatu general secretary Zwelinzima Vavi and the National Union of Metalworkers (Numsa) landed in trouble for, among other utterances, saying the SACP was irrelevant. Vavi and Numsa were kicked out of Cosatu.

Vavi and Numsa boss Irvin Jim used to say the deployment of SACP senior leaders such as the party’s general secretary Blade Nzimande into government weakened the party.

Sipunzi said mineworkers also needed to discuss if the SACP should contest elections when the relationship between the communists and the ANC was deteriorating.

He referred to fist fights between members of the ANC and the SACP in Mpumalanga, saying they signified the strained relations.

The SACP in KwaZulu-Natal and Mpumalanga has been leading the charge that the SACP should dump the ANC and contest elections on its own.

“Comrades I am not questioning the ability and the capability of the SACP, but we must vigorously and intellectually [critique] our strategic intervention and the deployment strategy, including dual leadership roles. Is the party failing to meet its mandate to be the vanguard of the working class?” Sipunzi asked.

Nzimande, who was warmly received by the delegates, called on members to remain in Cosatu.