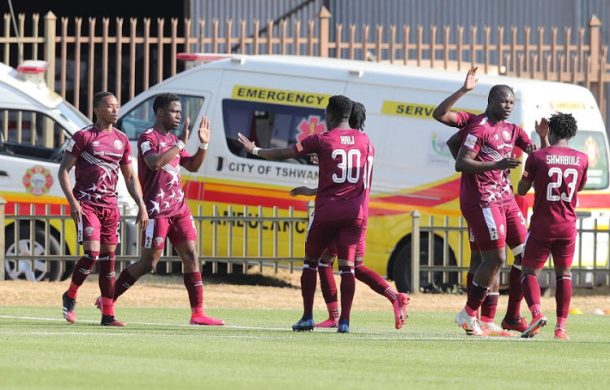 Ajax Cape Town’s hopes of winning the GladAfrica Championship took a huge blow on Wednesday as the team who had led the second-tier for most of the season lost 2-1 to JDR Stars to concede the lead to Swallows FC in the penultimate round.

Ajax went into the game in pole position‚ and even with hopes of wrapping up the title a game early should they win and Swallows lose. Instead‚ the Cape side’s defeat‚ and Swallows beating 10th-placed Richards Bay FC at Tuks Stadium saw the Dube Birds dramatically snatch the First Division (NFD) lead ahead of Sunday’s final round of games.

Ajax had 54 points coming into Wednesday’s defeat and a +11 goal difference. Swallows had 51 points and +9.

Swallows’ win against the team from northern KwaZulu-Natal saw them draw level on 54 points with Ajax – who had come into the Gauteng bio-bubble with a seven-point lead – and go to a +11 goal difference‚ while the Urban Warriors slipped to +10.

Ajax meet Mbombela United at Rand Stadium in Sunday’s blockbuster finish. Swallows face Tshakhuma Tsha Madzivhandila (TTM)‚ the outfit who have bought the Premier League franchise of Bidvest Wits‚ at Makhulong Stadium. All the final-round games are at 1.30pm.

Pretoria outfit Stars‚ who came into the game in sixth place‚ significantly boosted their playoff chances with the result.

Ajax had two SA ex-junior internationals who were part of Fifa’s U-20 World Cup in South Korea in 2017 – centreback Thendo Mukumela and midfielder Grant Margeman – in their line-up‚ plus a former Orlando Pirates centreback in Rooi Mahamutsa.

With their player quality‚ including a number of the latest products from their famed academy‚ the Urban Warriors dominated possession and territory in the opening half but failed to turn that into opportunities. Stars’ organisation and deep-lying defence was not penetrated.

Stars’ resilience‚ shape‚ and frustration of Ajax in the first half gave way to a more offensive outlook at the start of the second that saw the Warriors stunned by a double strike by Matsemela‚ who came on at the break.

The ball was worked across the edge of the box from one winger‚ Olwethu Ncube‚ in the middle‚ to another‚ Vusimuzi Mncube‚ who slipped the pass through for the run free down the left of Matsemela‚ who struck a powerful finish past Dutch goalkeeper Nick Hengelman.

Stars’ second came from a fine movement out of defence down the right that ended with Mncube in space to shoot low at Hengelman‚ with Matsemela on hand to sweep the rebound into an open goal.

Veteran substitute Rodgers headed in the cross of Thabo Mosadi‚ but far too late for Ajax to stage a comeback.