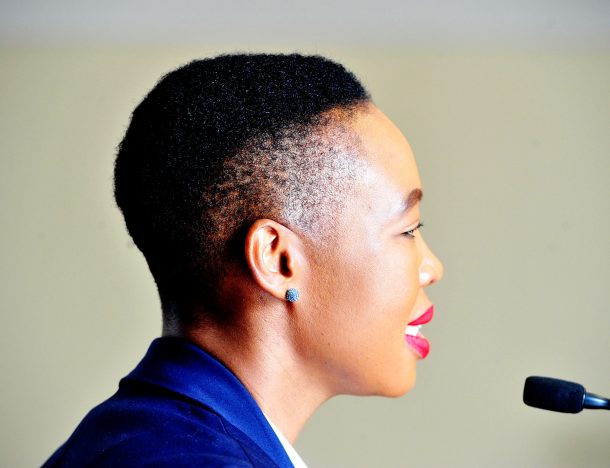 ‘I am deeply sorry for my actions’: Ndabeni-Abrahams breaks silence

Minister of communications and digital technologies Stella Ndabeni-Abrahams has broken her silence with a public declaration that she did in fact breach the regulations of the nationwide lockdown.

Ndabeni-Abrahams issued a brief statement on Wednesday after President Cyril Ramaphosa informed the country that he had placed her on two months’ special leave — one of them unpaid.

Minister in the presidency Jackson Mthembu will be acting as minister of communications and digital technologies for the duration of Ndabeni-Abrahams’ suspension.

Ndabeni-Abrahams said she wanted to apologise to the president‚ her colleagues in the national command centre and society at large for breaching lockdown rules put in place to curb the spread of Covid-19.

“I regret the incident and I am deeply sorry for my actions. I hope the president and South Africans will find it in their hearts to forgive me‚” she said in the statement.

“The president has put me on a special leave with immediate effect. I undertake to abide by the conditions of the special leave.”

The action comes after the minister appeared in a social media post this past weekend lunching with former deputy minister Mduduzi Manana — who resigned from his position and was convicted for the assault of a woman.

South Africans have been strictly prohibited from non-essential gatherings as part of regulations governing the 21-day nationwide lockdown to curb the spread of Covid-19.

The picture of Manana‚ his family and the minister appeared briefly on the former deputy minister’s Instagram feed before being deleted. Manana issued a statement on Tuesday saying the minister had been in the area for essential work and had stopped by his place to pick up donations of protective gear when he asked her to join his family for lunch.

Ramaphosa said he was “unmoved by mitigating factors‚” tendered by the minister when he met her.

Hundreds of South Africans have been arrested and face jail time or fines for violating the regulations. The presidency statement said that the law “should take its course‚” in terms of the allegations that Ndabeni-Abrahams violated the lockdown regulations.