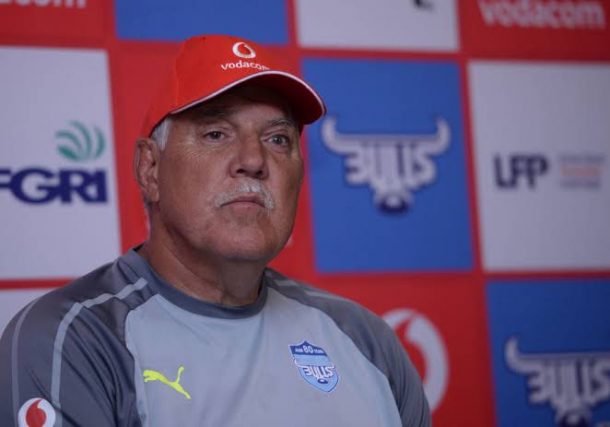 Bulls coach Pote Human has included two uncapped players in his starting line-up for the clash against the Highlanders at Loftus on Saturday in a move that is set to send a strong message to senior players performing below expectation.

Human has thrown No8 Muller Uys and lock Ian Groenewald in the deep end in a match where the Bulls will be looking for their first Super Rugby win of the season after four successive defeats.

Uys‚ who led the Blue Bulls U21 side to the SA Rugby U21 Championship final last year‚ is highly rated at Loftus and Groenewald has been making waves on the domestic scene with Stellenbosch University‚ Western Province and the Griquas.

Asked to explain the surprise debuts‚ an honest Human conceded that the decision was a desperate attempt to win their first match of the season against the New Zealanders after deflating defeats to the Sharks‚ Stormers‚ Blues and the Jaguares.

“We need to do things a little bit differently this week‚” said Human.

“We are in Round 6 and are yet to win‚ so tough choices had to be made. The players and I understand what needs to be done and accept the accountability thereof.

“There is no doubt that we have our backs against the wall and will need to deal with that pressure to restore the pride and belief of the Loftus faithful.”

The debutants will be under pressure to help the Bulls get a positive result before they embark on their tour to Australasia from next weekend. They will take on the Reds and Waratahs in Australia‚ and the Hurricanes and Chiefs in New Zealand.

“Muller and Ian have been working hard‚ so it is great to see them being rewarded.

“They are both intelligent rugby players who leave nothing on the field and congratulations to them.”

Their inclusion into the starting line-up marks two of three forward changes that also see Ruan Nortje slotting in as Groenewald’s partner in the second row.

Human has made only one change among the backs with highly-regarded kicker Manie Libbok getting his first start of the season‚ and with former Springboks flyhalf Morné Steyn shifting to the bench.