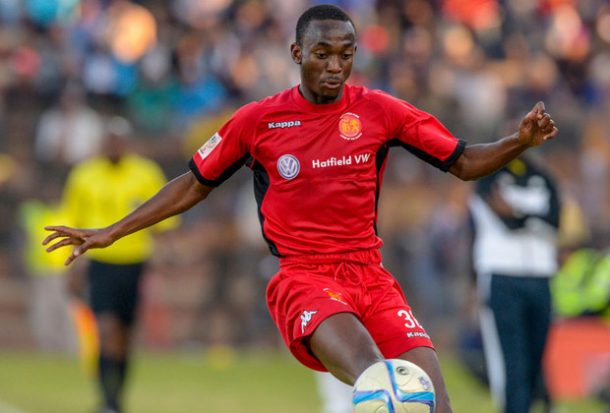 Highlands Park striker Peter Shalulile has set himself a target of netting 15 goals in the league this season and is three strikes away from hitting the mark after regaining his form.

The Namibian international struggled with his form last month but has hit a purple patch and produced three successive man-of-the-match performances in both league and cup matches this month.

“It was a bad January for me‚ no goals‚” said Shalulile.

“But that never stopped me from going on and I had a belief that things would come at the right time.

“I thank God that my form is back and I’m going to keep pushing.

“What’s changed things for me was that I put a lot of pressure on myself‚ that’s what has changed.

“All the weight was on my shoulders and my teammates said ‘don’t put that (much pressure) on your shoulders‚ everything is going to be alright’.

“This is the reward.”

Shalulile said he would not rest on his laurels as he wants to fulfil his dream of scoring 15 league goals this season.

“Well I’m that person that aims for myself and I have put 15 goals (as my target)‚” he said.

“What happens after that (15 goals) is a bonus‚ you know.

“There are a lot of good strikers in this league and we’re competing‚ and I’m who I am today because of them.

“Well I’m not that far from my target‚ three goals and then the rest is a bonus.

“I take it one game at a time and then hopefully I reach my goal.”

Shalulile said his form was as a result of hard work and belief that he can help his team.

“It’s all the hard work you know‚ and we give glory to God for this because without him it’s impossible.

“My teammates have been helping me throughout everything.

“I always say you can’t do anything without your teammates‚ you need someone to help you and that’s what they did.”

Highlands visit Golden Arrows in Durban on Saturday in a battle for both teams to cement their positions in the top eight.