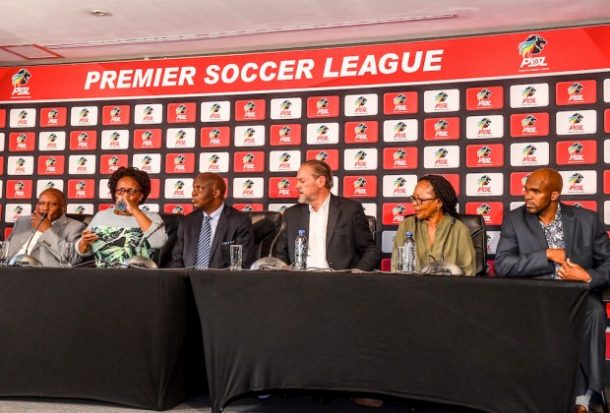 The handbook of rules and regulations governing professional football in South Africa runs to close to 100 pages‚ and covers all aspects of the running of the game‚ but makes no allowance for what to do in case of a curtailed season.

In effect‚ there is no guidance for what the Premier Soccer League (PSL) can‚ or must‚ do in situations of force majeure (superior or natural circumstances)‚ like the coronavirus health scare‚ impact on a football season‚ causing to be abandoned as is increasingly looking a possibility at this time.

The PSL handbook says: “The Board of Governors is the supreme decision-making organ of the league and comprises the chairpersons of the Member Clubs or duly appointed Member Club Officials in General Meeting.

“It has the power and authority to do any act or thing as may be required to give effect to the objects‚ and exercise the powers of the league.”

“The Executive Committee of the league is responsible for the administration‚ management and control of the league and has the authority to exercise all of the powers of the league except to the extent that this constitution reserves certain powers exclusively for the Board of Governors.”

The Board of Governors requires a two-thirds majority. Each of the 16 top-flight clubs has 10 votes and the second-tier GladAfrica Championship clubs two votes. The executive committee members have one vote each.

In England’s Premier League there is also no rule on what to do in the extraordinary circumstance of a league season being unable to be finished.

There‚ too‚ clubs will have to make a combined decision on whether to award Liverpool the title or declare the season null and void – if they are unable to resume.

The cut-off date for the 2019-20 season is effectively June 30 – when the contracts of many players run out.

That makes it difficult to continue with the current campaign after that date.

An example would be Kaizer Chiefs midfielder George Maluleka‚ who becomes a Mamelodi Sundowns player on July 1. He would not be able to play for Chiefs after June 30‚ even if the club still had games to complete.

Also vexed is the issue of promotion and relegation.

One suggestion being muted by club officials contacted by TimesLIVE is to have no relegation in the two leagues under the PSL’s control and to promote the top two clubs in the GladAfrica Championship.

That would mean an 18-team top tier for next season while the second tier would be down to 14 teams.

But there is a heavy financial cost to that idea as the league would have to find R50-million for the season in additional grants.