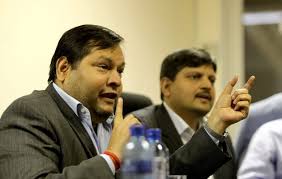 Guptas’ deals with SABC could be ‘terminated’

The TNA Biz Brief’s run on the SABC could come to an end soon.

In its recommendations‚ it demanded further investigation in to “all potential misleading or contradictory evidence relating to SABC board minutes‚ commercially sensitive documentation not provided‚ cost incurred by the SABC in hosting the TNA breakfast show”.

The business briefing breakfast show is organised by the Gupta-owned The New Age newspaper‚ and features government officials.

It also said the public broadcaster’s accounting authority “must review the feasability of the business case of entering into agreements with rival TV stations so as to ensure that the SABC is not involved in any cross subsidation to the competition”.

“In all instances where such deals are in essence diverting resources from the SABC such deals must be terminated.”

In its summation of the hearings‚ the committee noted that thee SABC’s “then corporate executive: technology testified that a meeting had been arranged between himself and a representative from New Age Media‚ the parent company of ANN7”.

“During the meeting attempts were made to ‘sell’ an agreement which would effectively allow New Age Media to take over SABC news and rebrand it.”

The document said that while the “committee could not establish beyond doubt whether the distribution of the New Age newspaper was still the norm at the SABC…what is obvious is that the SABC‚ while it was facing financial difficulties‚ appeared to have signed exclusive contracts to distribute a newspaper subscription at a national scale over and above those of other media newspapers”.

The document‚ which will be discussed on Thursday and Friday‚ also recommends that “steps must be taken to recover irregular‚ fruitless and wasteful expenditure in instances where it can be recovered”.