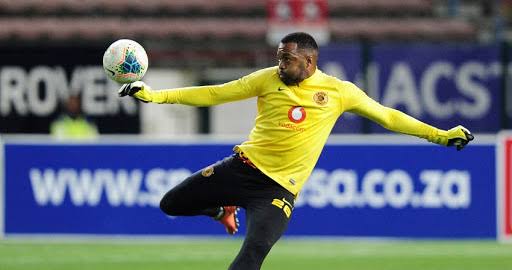 Ernst Middendorp has confirmed that goalkeeper Daniel Akpeyi will return to the starting lineup when Kaizer chiefs host Maritzburg United in a crunch league match at FNB stadium on Saturday.

Returnee Itumeleng Khune kept goal when Chiefs faced Royal Eagles in the Nedbank Cup on Saturday but it seems Akpeyi remains the Chiefs coach’s preferred No1 at the moment as the club pushes for a first league title in five years.

Akpeyi has been on form in Chiefs’ title-chasing run and they have surged to the summit of the Absa Premiership standings with the Nigerian cementing his place in the starting 11 during Khune’s injury-enforced absence.

“At the moment we have made it very clear it was a decision (based) on the cup game (playing Khune against Eagles)‚” he said.

“I discussed it with the goalkeeping coaching department and it is a very clear statement that Daniel is on the field playing‚ starting the goalkeeper position‚” he said.

Khune and his wife‚ Sphelele Makhunga‚ became proud parents of a bouncing baby girl recently and the Chiefs goalkeeper took to Instagram to share a snap of himself feeding the baby.

Middendorp also offered his congratulations to Khune and his wife.

“I think at the moment‚ it’s a very clear indication‚ that first of all‚ in terms of Khune it is very important to give him and his wife a very clear congratulations for the birth of the baby girl‚” he said.

Khune returned to the lineup in his third game of the season against Eagles following an unsuccessful two-match comeback from a long-term injury in September last year.

He said he was happy to don the No1 jersey again after months on the sidelines.

“It felt great to be back in the mix and the guys and the supporters welcomed me with open arms‚ and I have been working really hard to get back into the team‚” he said.

Khune acknowledged that he has developed healthy competition with Akpeyi.

“Daniel hasn’t made it easy for me and he deserves all my support because at the end of the day we want to achieve as a team.

“And whoever gets the nod will get our full support.

“That’s what Daniel has been getting from me (while on the bench) and from all of us‚ including the whole goalkeeping department‚” Khune said.

Asked about his new-born baby daughter‚ Khune declined to discuss the new arrival in his family.

“Thank you very much for your compliments but I don’t like talking about my private life‚ so we will stick to football for now‚” he said.

“I will bounce back and I will make sure that I perform very well on the field to reclaim my position at Chiefs and at Bafana Bafana.”