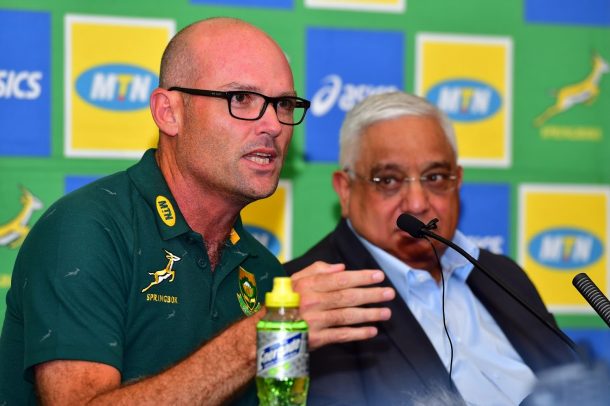 The time for shedding cobwebs‚ testing squad depth and the waters are over as South Africa’s top players from this weekend ramp up their preparation for the Test series against the British & Lions Lions.

They will‚ of course‚ also embark on a new chapter for South African rugby with the launch of the Rainbow Cup but that seems insignificant when compared to what lies ahead with the long-awaited visit of the Lions.

South Africa’s players have had precious little game time this year and they will have to use the Rainbow Cup to regain optimal fitness and resultant confidence to meet the demands of a series against the Lions in July and August.

SA Rugby director of rugby Rassie Erasmus and Springbok coach Jacques Nienaber will already have a clear idea which foreign-based players they will want to involve for the series against the game’s most glorified composite side.

This will be the opportunity for the locals to put their best foot forward.

While the preparation series that followed the Currie Cup was about building depth‚ the Rainbow Cup will be about squad refinement and bringing a hard edge to the country’s top talent.

“For this competition‚ it is the full metal jacket‚” said Stormers coach John Dobson‚ who stressed that they will be selecting their best team every week.

“We have gone through what the team will look like for this competition. Our approach is to do as well as we can. Week in and week out we will build consistency and coherence.”

As much as it is about advancing the Stormers’ cause in the competition the bigger picture is very much in view for Dobson.

“We will also give these players every chance to get match fit and prove themselves on the international stage.

“The Rainbow Cup will be a performance competition for us. We owe it to the national cause that with nine players in the recent alignment camp [for the Springboks] we have to give them as much rugby as possible. That is the point of this competition.”

Having built depth in the Currie Cup and preparation series‚ Dobson knows solid performances in the Rainbow Cup will help instil confidence ahead of the team’s entry into the PRO16 later this year. That will be a valuable commodity especially at the start of the competition against European sides.

“We know the first couple of months of the Pro16 we will be without our Springboks‚ if they play in the Rugby Championship and year-end tour‚” adding they may also augment their playing resources for that purpose.

One of the stand-out features of the Stormers’ opening match this weekend against the Sharks at Cape Town Stadium is the expected return to the playing field of 2019 World Rugby player of the year Pieter-Steph du Toit.

A serious leg injury sidelined him for almost the entire 2020 season and his return is one of the most eagerly-awaited comebacks on the domestic front for some time.