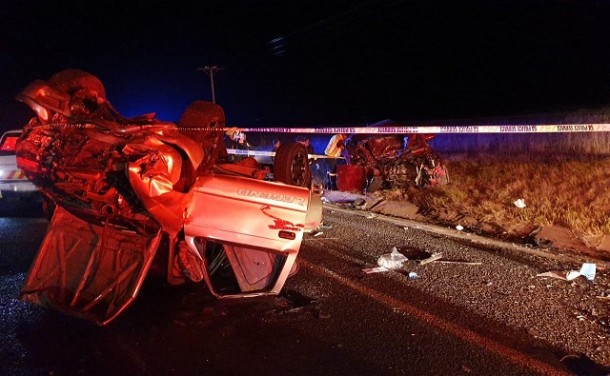 A horrific head-on collision between a bakkie and a light motor vehicle on the N2 near Ermelo in Mpumalanga on Saturday evening claimed the lives of four people and left another in critical condition.

ER24 paramedics found a car on the side of the road and a bakkie lying on its roof‚ with the occupants still trapped inside.

“There were three occupants‚ two male‚ one female‚ entrapped in the LMV and one female also entrapped in the bakkie. All the entrapped had suffered severe injuries‚ showed no signs of life and were unfortunately declared dead on arrival. They were believed to be between the ages of 28 and 35‚” said ER24 spokesperson Ross Campbell.

A fifth man‚ believed to be the driver of the bakkie‚ survived and is in a critical condition.

“The driver of the bakkie was found outside his vehicle having suffered multiple injuries. He was stabilised on scene before being taken to Ermelo Provincial Hospital for further treatment‚” Campbell said.