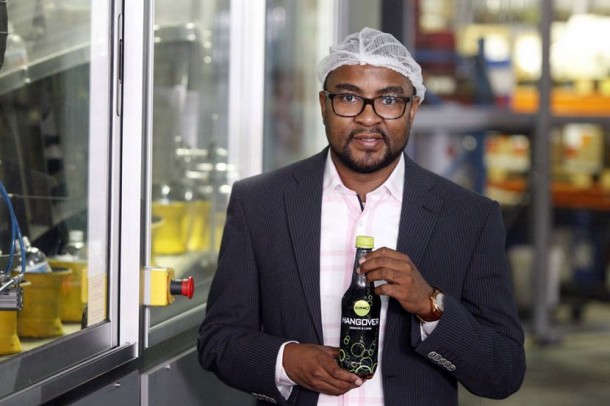 South Africa’s boozing culture and the effects of alcohol on health has inspired a former street kid-turned-businessman to invest R1-million to produce a drink that would fight hangover and protect the liver.

Teboho Twala, 35, of Dainfern, Johannesburg, has been working on this beverage for two years. During that period, he did market research, branding, bottle design and got himself partners.

Zzero Hangover, which Twala refers to as a “functional drink” because of its health benefits, would hit the shelves in two weeks. He said he had already secured orders from as far as Botswana.

The launch of Zzero Hangover would be followed by that of an energy drink called Zzero Caffeine and drinking water called Zzero Thirst. “Zzero is an unknown brand entering a big market. I want to hit it [market] hard, [and] make a good first impression without holding back. I’ve spent R1-million already on a product that has not even dropped in the market, that’s how confident I am,” Twala said.

He hired the services of Inhle Beverages in Heidelberg for bottling and quality control tests. Factory workers only got basic ingredients and Twala would deliver his “secret special formula” in person for final mixing. The secret ingredient is what he said would cure hangover.

He said Zzero Hangover was developed in consultation with nutritionists and a doctor who put it through various safety tests. He said that t he beverage promises to re-hydrate, replenish and revitalise the body to reduce effects of a hangover and protect the liver.

It was also recommended to teetotallers as it improves blood concentration, Twala said. It has no caffeine. The World Health Organisation’s 2014 study called Global Status Report on Alcohol and Health showed that 60% of SA’s population drank alcohol, with each individual guzzling up to 12 litres of pure alcohol annually.

This was too high compared to the worldwide average of 6.2 litres gulped down annually. The study concluded that SA loses R37-billion annually through alcohol-related crimes, incidents and health scares.

“I realised that alcohol and hangover are killing people. I also read that a lot of money was being lost by businesses due to staff that were hung over. They don’t turn up for work because they are sick. Even when they do go to work they become unproductive,” he said.

Through his travels, Twala met a group of businessmen who owned a Slovakian-produced hangover drink. He then bought their franchise to distribute the European drink in SA but did not have the R50-million to get the formula to produce the beverage here.

This meant that Twala had to import the drink and sell it locally – a model which proved too costly. The business collapsed but the idea to start his own did not.