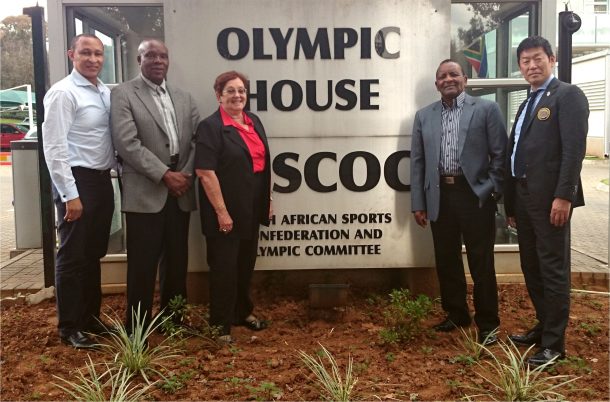 The evidence is contained in a legal document submitted by the board in its push for arbitration to reverse resolutions adopted by the Sascoc general assembly‚ the body’s highest decision-making body‚ at a special general meeting (SGM) last month.

The general assembly ordered the board to reinstate Hendricks and to scrap the disciplinary hearing.

The board‚ referring to itself as Sascoc in its statement of claim‚ wants to take to arbitration the 47 sports bodies that voted to overturn the executive decision on Hendricks.

The board suspended Hendricks in mid-April after a legal opinion based on an allegation by Tennis SA (TSA) board member Ntambi Ravele that Hendricks and TSA president Gavin Crookes had conspired to block her from standing in the Sascoc elections.

The Sascoc ballot had been scheduled for March 28‚ but after being postponed because of lockdown‚ is now set for November 7.

The board immediately asked its judicial body to investigate the Hendricks matter.

An independent arbitration into the matter exonerated Hendricks in early July‚ but the board kept his suspension in place pending the judicial body probe.

But it transpired that the Sascoc board had never appointed the members of the judicial body‚ apart from its chairman‚ Willem Edeling.

The board didn’t back down‚ but instead issued appointment letters to at least four of the other six supposed judicial body members on July 31‚ the same date on which Edeling informed Hendricks he would be facing charges.

The legitimacy of the judicial body was raised by Hendricks in the disciplinary hearing.

“The point raised by Hendricks’ legal representatives in relation to the standing of the judicial body under the constitution found favour‚” the board says in its statement of claim.

“Subsequently‚ acting on legal advice‚ the board resolved at its meeting on [September 8] to reaffirm the disciplinary proceedings against Hendricks.”

What the board actually did‚ according to a memorandum listing the resolutions it took that day‚ was to withdraw the authority it had given to the judicial body.

“The board hereby revokes the delegation of authority to the judicial body to investigate any complaints or charges against … Hendricks‚” stated the board memorandum.

The board‚ at the same meeting‚ then reinstated all charges against Hendricks and reappointed the prosecutor‚ presiding officer and its attorneys to continue with the hearing.

“Having considered the matter concerning the alleged conduct of Hendricks and having applied its mind thereto after taking legal advice thereon‚ it resolves as follows to [reinstate the charges and reappoint the various players in the disciplinary].”

This board resolution was adopted by all five executive members who were present‚ although the memorandum didn’t say if it was the same five who intend standing in the Sascoc elections.

The board is arguing that even though the arbitrator found no evidence of a conspiracy by Hendricks against Ravele‚ there were other issues raised that justified disciplinary action.

“The findings are narrowly confined to whether or not Ravele had proved a ‘conspiracy’. There are several aspects of the award where the arbitrator expresses disquiet with the conduct of Hendricks‚” said the board.

The arbitrator criticised Hendricks on various points‚ but felt there was no reason to subject him to a disciplinary process.

The board‚ in its statement of claim‚ argues that it had the right to institute disciplinary action against Hendricks and to suspend him.

The board is arguing that the SGM agenda issued by Sam Ramsamy‚ appointed by the International Olympic Committee (IOC) to facilitate the Sascoc elections‚ was unlawful‚ as was the voting that took place subsequently.

The 47 federations have yet to respond to the board’s statement of claim.​