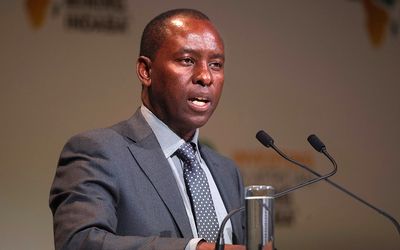 The embattled mineral resources minister came under sustained criticism from opposition MPs as he was questioned about his links to the Gupta family and his erroneous statement last week about the cabinet calling for a judicial inquiry into the conduct of banks.

Zwane had to withdraw the statement, which triggered panic on the markets, after it was repudiated by the Presidency on Friday.

In response to opposition party questions yesterday, the minister read a prepared answer in which he invoked the principle of the separation of powers to claim that assessment of his actions was the prerogative of the cabinet.

“The honourable [DA spokesman on finance David] Maynier has no jurisdiction to ask this question,” claimed Zwane.

The cabinet is constitutionally accountable to parliament.

“Discussions of the cabinet stay in the cabinet. Only the president can decide on a judicial commission,” Zwane insisted.

Opposition party leaders said Zwane was “useless” and asked “So why did you release the statement?”

Zwane then went on the attack, claiming that banks should not be allowed to unilaterally close accounts because the poor suffered as a result of such decisions.

His answer received very slight applause from the ANC benches.

To questions by DA MPs James Vos and Annette Steyn about why he issued his statement of last week, Zwane merely repeated his written response.

The minister, previously Free State MEC for agriculture, has had difficulty in the past in explaining his links to the Gupta family.

Yesterday he was reminded of his written justification, when an MEC, of the use a military air base by an aircraft chartered by the Guptas to bring wedding guests to South Africa.

Cornered, Zwane was thrown a life line by National Assembly Speaker Baleka Mbete, who is also chairman of the ANC.

Mbete allowed Zwane to evade answering opposition questions – for which she was taken to task by his interrogators.

“You [Mbete] break the rules with imperviousness! You are a disgrace! You are letting the minister off the hook! You lose in court all the time because you act like this!” raged DA chief whip John Steenhuisen.

But Mbete would not change her stance.

Yet again, Zwane did not deal with the question in his reply, causing further outrage on the opposition benches.

In his “mis-statement” late last week, Zwane said that the cabinet had recommended that President Jacob Zuma set up a judicial inquiry into why banks had declined to continue offering services to Gupta-owned businesses.

On Friday The Presidency sais that although Zwane was a member of the team set up to look into the banks’ decision he “does not speak on behalf of the cabinet and the contents of his statement do not reflect the position or views of the cabinet, The Presidency or the government”.

Zwane was chastised by the ANC and its alliance partner, labour federation Cosatu. The federation called on Zuma to discipline him.

Zwane’s spokesman, Martin Madlala, later admitted that his principal’s statement was misleading and that he had not been speaking on behalf of the cabinet.

But in an extraordinary plot twist yesterday, Zwane defended his statement.

Finance Minister Pravin Gordhan would not express confidence in SA Airways board chairman Dudu Myeni when cornered by the opposition in parliament yesterday.

DA MP Alf Lees asked Gordhan why the Treasury had opposed Myeni’s reappointment as chairman. Myeni is said to be a close ally of President Jacob Zuma.