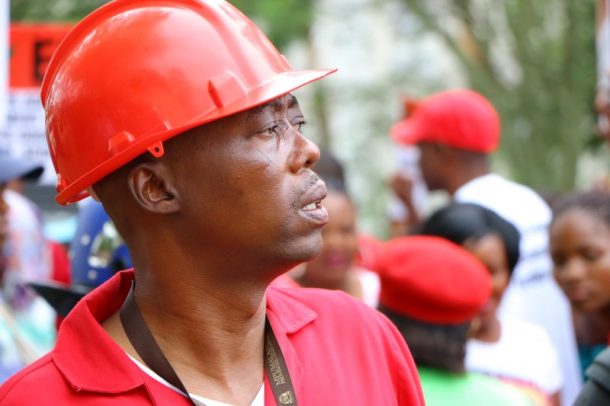 The EFF in Mpumalanga on Tuesday said it would continue with its action to keep doors closed at all Clicks stores despite a court interdicting the party from interrupting the beauty and health retailer’s business.

The interim order prevents the EFF from intimidating employees and inciting violence against commercial operations of the company.

The party’s chair in Mpumalanga‚ Collen Sedibe‚ said they were not worried about the court order.

“We are not worried. The organisation has not told us to stop so we will not be stopped by the court‚” he said.

Sedibe was speaking to TimesLIVE as EFF members‚ clad in red regalia‚ climbed into their vehicles and left the Highveld Mall in Witbank to head to the neighbouring town of Middelburg.

The group had just demonstrated inside the mall‚ where they found the doors of the Clicks outlet shut.

On Monday‚ EFF protesters damaged a door at a Clicks outlet in Ben Fleur Boulevard in Witbank after finding it was operational‚ despite calls for it to close.

Other Clicks branches in the area had ceased operations despite employees arriving at work dressed in civilian clothing.

A petrol bomb was thrown at the Clicks store in Saveways Crescent Centre in Witbank in the early hours on Monday. The blaze was quickly contained and resulted in minimal damage. The EFF has not claimed responsibility for that attack.

Protests against the beauty and health retailer came after it ran an advert on its website last week which some considered demeaning to black hair. The advert showed an image of African hair labelled as “dry and damaged” and has led to a social outcry.

The EFF‚ which has labelled the advert as “racist”‚ has vowed to shut all Clicks stores throughout the week.

EFF MP Mbuyiseni Ndlozi said the court could not stop protests from happening‚ but had simply ordered an end to intimidation. He called on party members to continue with their actions.

“You cannot interdict a protest in any democracy. Protest is the very engine of a democracy. No court‚ in its constitutionally right mind‚ can ever grant an interdict to stop a protest. Clicks could not get an order to interdict protests. Fighters attack‚” he said.