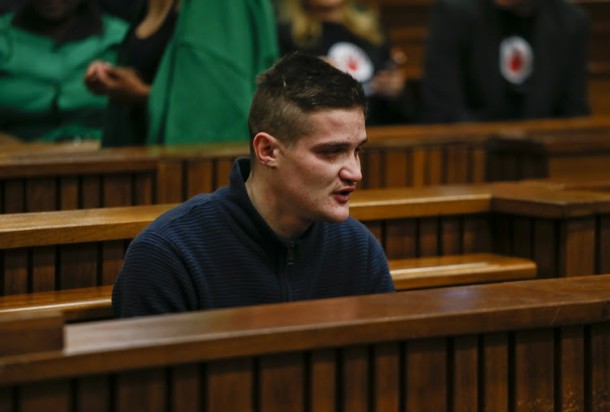 Nicholas Ninow changed tables at the Dros restaurant where he raped a seven-year-old child so that he could be closer to the children’s area.

This was part of the testimony of an employee at the Silverton‚ Pretoria‚ restaurant on Monday. The employee asked not to be named.

Ninow is accused of raping a seven-year-old girl at the restaurant in September 2018.

Earlier on Monday‚ Ninow pleaded guilty to rape‚ possession of drugs and defeating the ends of justice in the Pretoria high court. He pleaded not guilty to an assault charge.

The woman told the court that when Ninow – who could not be named until he had pleaded because of the rape charge – arrived at the restaurant‚ he ordered a draft beer. He then followed this up with alcoholic shooters‚ and then more beer.

“When he arrived‚ I asked if he wanted a table of one or two‚ and he said two. He ordered a Castle draft and went outside to smoke. He said he was waiting for someone‚” the woman said.

But he then moved to a table closer to the kiddies’ corner. “The children were visible and making noise as they were playing‚” she said.

According to the woman‚ she and the child’s mother‚ a child minder and two other waitresses knocked on the stall door. They all tried to open it but someone inside the cubicle pushed the door back.

“We pushed the door harder and it eventually slightly opened. We then saw there was a man inside and that person was the accused [Ninow]‚” she said.

Ninow tried to assault the woman and the child’s mother with a belt‚ the woman said.

“He was topless. We then heard the child calling out for her mother. I went out and screamed that the doors must be closed‚” she said.