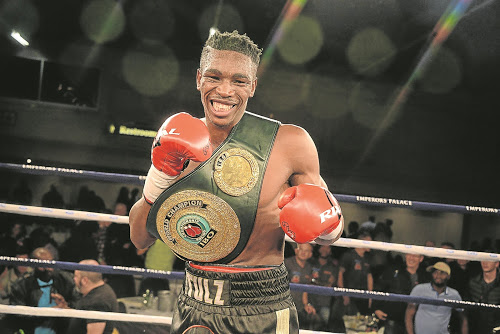 Former world champions Hekkie Budler and Tulz Mbenge looked relaxed but confident on Tuesday as they spoke about their comeback fights on the same bill later this month.

They laughed off a vociferous crowd of DRC supporters there to support Katembo Kuvesa‚ Mbenge’s opponent for the vacant ABU welterweight title at the Riveira on the Vaal on March 28.

Mbenge‚ his turn came to speak‚ even called on the supporters to chant their trademark “Ebotu”‚ vernacular for punch.

“I’m ready‚ I’m prepared. I see the Ebotu guys are ready‚” quipped Mbenge‚ who hasn’t fought since losing his IBO title to Sebastian Formella in Germany in July last year.

“We know that that Tulani is a former world champion‚” countered Kuvesa’s manager‚ Patrick Bonyeme‚ who translated for his fighter.

“We took this fight because we know we’re going to beat him. This is the end of Tulani.

“This boxer is stronger than the guy who beat you in Germany. Tulani is scared.”

Budler‚ who hasn’t seen action since being relieved of his WBA flyweight crown in Macao in December 2018‚ was entertained by the verbal sparring.

“I enjoyed that‚” he said with a smile.

“It’s the first time in three/four years I’m fighting in my country‚” he added.

Budler‚ who hasn’t fought on home soil since February 2017‚ takes on Alphoe Dagayloan of the Philippines in the main supporting bout.

The bill has some good prospects on the undercard‚ including matric pupil Cayden Truter‚ a junior-lightweight‚ and middleweight Donjuan van Heerden.

11 months ago in News, Uncategorized