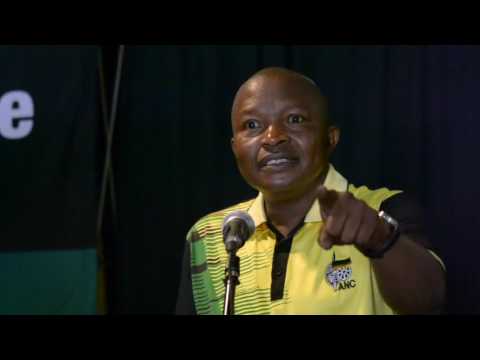 DA parliamentary leader John Steenhuisen has called on President Cyril Ramaphosa to “rebuke” his deputy‚ David Mabuza‚ for “failing to stand up against human rights abusers”.

This comes after Mabuza‚ speaking in parliament‚ said SA “should keep its mouth shut” when it comes to laws in African countries that have made homosexuality a crime.

Mabuza was responding to a question by DA MP Tim Brauteseth as to whether he would take a principled stand and condemn human rights abuse committed against members of the LGBTQI+ community across the African continent‚ especially in Uganda.

“Our laws should not be in violation of international laws that we are signatories to. SA only intervenes in situations where parties in conflict officially request her assistance or intervention. Our country respects the sovereignty of other nations. Let’s be decent and keep our mouths shut.

“The way we believe in things as South African‚ we must not impose our beliefs on everyone. But we will seek to negotiate‚ to persuade people to see things the way we see them‚ and we are going to use the platforms that are provided for.

“So let us not be arrogant and think we are the best out of this world‚” said Mabuza.

In a statement‚ Steenhuisen slammed Mabuza for “refusing to denounce the immoral and unjust behaviour of fellow African states towards members of the LGBTQI+ community”.

“It cannot be this government’s stance to keep quiet in the face of an assault on the rights of fellow Africans.

“As a leader on the continent‚ SA ought to be a vocal champion of human rights and a torchbearer for progressive‚ compassionate politics.

“The deputy president’s conduct in parliament smacks of cowardice. Our nation and our continent deserve much better‚” he said.

Steenhuisen also called on President Ramaphosa to discipline his deputy.

“I call on President Cyril Ramaphosa to strongly rebuke deputy president Mabuza’s remarks on homosexuality and blatant refusal to condemn these actions‚ and to break this government’s silence by taking a strong public stance against the attack on LGBTQI+ Africans in many countries on the continent‚” he said.