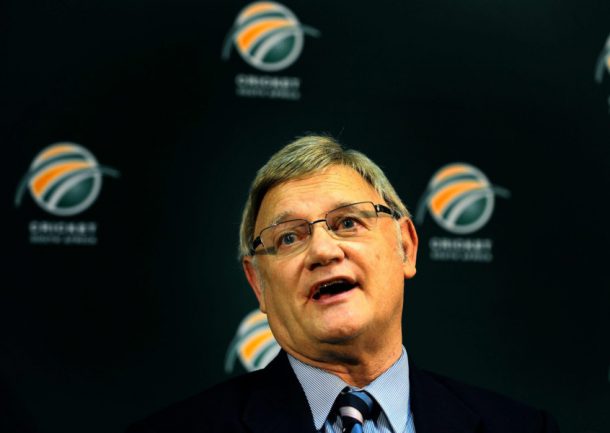 The scientist was critical of the gains made to transform the game during a wide-ranging interview with TimesLIVE this week on transformation in SA cricket.

“If you look at the composition of the CSA management at this stage‚ it just became untransformed overnight you know‚” Dr Basson told TimesLIVE.

Dr Basson was referring to the sweeping changes at CSA that saw Graeme Smith take over the new director of cricket role and Dr Jacques Faul replacing suspended Thabang Moroe as chief executive during a chaotic period in December‚ among others.

“Look I don’t know….I don’t know‚” said Dr Basson when asked to delve deeper into the changes at CSA and the appointments of Smith and Faul in particular.

“I’m a white man and I’ve been involved as an academic through sport and as administrator for more than 30 years.”

The transformation debate has divided sport administrators and politicians in the middle.

Dr Basson said he has been involved in conducting transformation surveys in 18 sporting codes in the country at a national and provincial level that found that sporting federations will run into sustainability problems if the focus is not on black majority population.

“To make matters worse the white population in the country is disappearing because the birth rate is declining rapidly.

“The under-18 year old white group in the country is diminishing by more than 30% over the next 10 to 15 years.

“I don’t say I am right but‚ if you have a leadership that do not share this‚ but I think I am logical as a scientist‚ and with a long experience as sport administrator‚ I think that I see it in a proper light‚” said Basson.

“If you read transformation (EPG) reports from the last seven years‚ the future is not bright.”

He warned that more resources and facilities should be channelled towards areas that were previously marginalised.

“90% of our population is black. With the white population dying‚ we have to focus on the black population.

“So why do you perpetuate a system with a dying breed?‚” asked Dr Basson.

“Why don’t you create opportunities wherever you are and see to it that people are well prepared and have the experience to be able to lead the country into the future?”

Dr Basson‚ whose transformation credentials date as far back as 2002 when he first conducted a review of transformation in cricket‚ has played a key role in a ministerial structure – the Eminent Persons Group (EPG) on Transformation in Sport – over the last six years.

The EPG’s mandate includes the establishment of a management system to monitor‚ evaluate‚ advise and report on the transformation status and the effectiveness of implementation of the sport Transformation Charter.

Dr Basson’s contribution towards transformation in sport over the years was underlined by then Minister of Sport Tokozile Xasa in delivering her 2019 EPG report.

“We could not have done what we have done if it was not the selflessness of our patriots in the Eminent Persons Group (EPG) on Transformation in Sport who have worked hard in producing this sixth edition report‚ said Minister Xasa on April 23 last year in Pretoria.

“Let me also thank Dr. Basson who has worked tirelessly to ensure that every year we take stock and assess how far we have gone to transform sport as part of the broader agenda of creating a Non-Racial‚ Non-Sexist‚ united and prosperous society. We remain indebted to yourselves.”

Dr Basson said while there have been gains made on the transformation front‚ much more still needs to be done by the governing CSA.

“I think at a national level and what has been put into place over the years‚ and with influence of particularly Gerald Majola (former CSA chief executive) when he was still there‚ and the appointment of Max Jordaan as the transformation officer‚ there’s has been terrific progress at national level.

“The talent is being discovered. The KFC programme at the primary school level has been a massive success and has promoted many players to move up the ranks. Excellent‚” said Dr Basson.