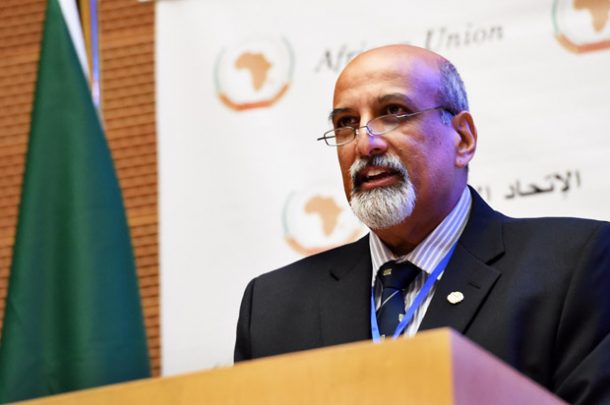 ‘The central issue is to separate science from the politics’
If scientists compromise on science and give in to political pressures during the scourge of Covid-19‚ the pandemic may end up killing more people‚ just like HIV/Aids did during Aids denialism‚ the country’s chief scientist has warned.

Professor Abdool Salim Karim‚ director of the Centre for the Aids Programme of Research in SA and chairperson of the Covid-19 ministerial advisory committee‚ told delegates at the 23rd International Aids Conference that scientists on the frontline of Covid-19 should always “stand by science”.

Responding to a question on what other low income and middle income countries could learn from SA’ response to Covid-19‚ Karim said books could be written on the subject‚ especially in Africa where many people who have led and developed expertise in the battle against HIV are now in the frontlines of Covid-19.

“I would say the central issue I have found is to separate science from the politics. As scientists we must stay true to our science because I can assure you there are many political pressures that will try to define how our country is dealing with this problem‚” he said.

“As investigators‚ as scientists‚ over many years we have always stood up for what was right‚ whether it was against Aids denialism and whether antiretroviral therapy worked. We’ve always stood on the side of science. We knew if we did that we will be giving advice and providing leadership on the basis of principle.”

One of the country’s top scientists who recently came under fire in government circles is Glenda Gray‚ Wits professor of paediatrics‚ SA Medical Research Council president and a member of the Covid-19 ministerial advisory committee.

Health minister Zweli Mkhize criticised Gray after media reported her finding fault with government’s lockdown regulations‚ saying they didn’t make sense and were not based on science.

Then acting director-general of the health department Anban Pillay’s request for an investigation into Gray’s conduct irked many of her fellow scientists.

Karim told delegates he had personally witnessed instances where things had gone astray in disease management.

He said this was because “science was not really accepted as the dominant paradigm”.

“We saw the same with HIV‚ where science was not used as effective paradigm. People questioned things and we ended up with people dying.

“With Covid-19 it is exactly the same situation. I had to deal with this in the frontlines with HIV so I can tell you from personal experience what that entails.”

He said with Covid-19 there was no luxury of debating with politicians whether wearing a mask was a good idea‚ “but there is science that guides us and we have to take action”.

Karim said one of the biggest challenges that demarcates Covid-19 from almost any other disease is how quickly it spreads.

“A week feels like two or three months. Things are moving so fast. It’s an all-consuming disease.”

Karim said the Covid-19 pandemic needed people who were thinking into the future and not just looking at today’s problems.

He said as SA approached its peak with at least 215‚855 confirmed cases of Covid-19 and 3‚502 deaths‚ there will come a time when it will look back on the pandemic as a marathon and when the surge is over‚ the country will take stock of its interventions.
While SA is not out of the woods when it comes to HIV‚ Karim said in many ways HIV has created a lot of capability to deal with Covid-19‚ including a move from laboratory tests to rapid testing .

“That was a big leap in HIV‚ when we moved from complicated laboratory testing to empowering testing and getting results in a few minutes instead of days.”

Just like HIV‚ Karim said Covid-19 was initially stigmatised when the country recorded its first few cases‚ but this was changing.

“There was so much déjà vu when we dealt with the first patients who were diagnosed. They were treated just like HIV patients were treated. But now people are ready to test because they are driven by different factors‚ including the need to know their status because it impacts on all their family members and the people with whom they interact.

“Stigma is a reminder that we can never let our guards down. We have to remain vigilant as we tackle the challenge of stigma‚ just like we did for HIV‚” Karim said.

Mary-Ann Davies‚ associate professor at the University of Cape Town’s school of public health‚ said the experience of dealing with HIV has helped the country to deal more effectively with Covid-19.

Professor Linda-Gail Bekker‚ deputy director of the Desmond Tutu HIV Centre and immediate past president of the International Aids Society‚ which hosts the conference‚ said Africa cannot afford to push aside the progress it had made on HIV and other health priorities to solely focus on Covid-19. She said the pandemic needed to be integrated with other epidemics.

“People we find it difficult to focus on more than one thing at a time. A new thing comes and pushes everything off the table. Frankly‚ we just cannot afford that. We have to constantly position HIV back on the table‚ but say it is not the only thing on the table. It exists within a broader global community‚ whether that is sexual reproductive health‚ global warming‚ TB‚ drug use and other issues such as food security.”

“Fast-forward to Covid-19‚ which insinuates itself fully‚ and suddenly it is the big thing and moves everything off the table. Somehow we’ve got to learn from it and keep all these health priorities moving forward in an organised‚ systematic and integrated way‚” said Bekker.