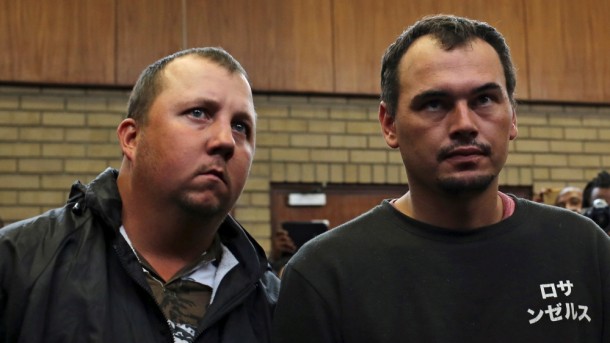 The two Mpumalanga farm workers convicted of trying to kill Victor Mlotshwa by forcing him into a coffin and threatening to burn him alive will be launching a fresh bid to be freed.

TimesLIVE has reliably learnt that Theo Jackson and Willem Oosthuizen’s lawyers have approached the Supreme Court of Appeal after High Court Judge Segopotje Mphahlele denied their appeal bid following their sentencing in October.

On Thursday‚ the two will be heading back to Mphahlele in the Middelburg High Court to apply for bail while they await the decision from the SCA.

Elsabe Juyn‚ who formed part of their legal team‚ on Wednesday confirmed the bail application but refused to divulge the basis of their case.

“Go back to whoever gave you that information! They should give you the full details‚” Juyn said.

Mlotshwa‚ who is still trying to come to terms with the ordeal‚ said he was aware that his attackers were trying to gain freedom.

“I got the call yesterday and it is just shocking to me‚” Mlotshwa said.

“I don’t know what is happening but I am broken inside‚” he told TimesLIVE by telephone on Thursday.

The pair were found guilty of assault with intent to cause grievous bodily harm to not only Mlotshwa but another man‚ Delton Sithole.

They were further found guilty of attempted murder‚ intimidation and kidnapping.

Jackson faced another charge of defeating the ends of justice after he burnt the coffin‚ which would have been used as evidence.

Oosthuizen and Jackson have maintained they have done nothing wrong. They denied ever having had laid eyes on Sithole and accused him of fabricating evidence.

Sithole had alleged that they had accused him of trespassing after they found him walking on a footpath. They repeatedly called him a k*f**r as they hit him‚ he said.

He claimed they only released him when when they spotted Mlotshwa a short distance away‚ also on the footpath‚ and went after him saying‚ “here is another k*ff*r”.

Jackson and Oosthuizen’s version was that they had confronted Mlotshwa after they found him in possession of stolen copper cables. They alleged that he had threatened to burn their crops and harm their families should they take him to the police and therefore put him in the coffin to scare him.

Mlotshwa‚ however‚ said he had done nothing to provoke them and he was waiting to hitch hike to town when he was attacked.

He claimed to have beaten cable-tied to the back of their bakkie and driven to a remote area‚ where he was beaten with knobkerrie and forced into a coffin as he pleaded for his life.

The two accused were arrested after a video they filmed of themselves‚ forcing Mlotshwa into the coffin‚ went viral.