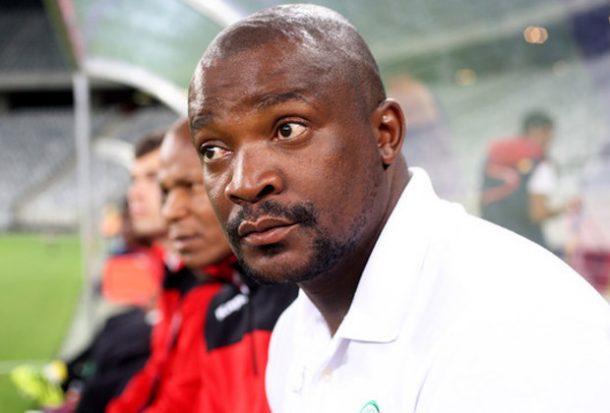 Chippa United coach Seema: ‘It’s a bit awkward because we are in the same hotel as Kaizer Chiefs’

Breakfasts have been awkward for Chippa United at their team hotel‚ says coach Lehlohonolo Seema‚ as they have shared their lodgings with Kaizer Chiefs‚ the Chilli Boys’ opponents in Wednesday night’s potentially make or break match-up in Amakhosi’s title bid.

Chippa and Chiefs are based at the same hotel in the bio-bubble‚ Seema explained ahead of the Absa Premiership clash at Orlando Stadium.

One of the most dramatic ends to a league season saw leaders Chiefs and second-placed Mamelodi Sundowns – separated on goal difference – both bottle opportunities to land near-decisive blows to the other on Sunday.

Chiefs were beaten 1-0 by Bidvest Wits in an afternoon game‚ as Sundowns could not capitalise losing to Baroka FC in the evening.

Amakhosi’s second-last fixture is against 12th-placed Chippa‚ whose five points gained from a 1-1 draw against Highlands‚ 1-0 win against Baroka FC and 1-1 draw against Stellenbosch FC have seen Seema’s team edge away from relegation danger on 31 points.

Seema was asked if playing the country’s biggest-supported team‚ whose fans are desperate for a league title after four seasons without silverware‚ adds pressure for Chippa.

“All the teams‚ all the games we have played are big games. And of course we all have agendas to push‚” the genial coach told an online press conference of the SA Football Journalists’ Association.

“And of course we are expecting a very difficult game. It’s a bit awkward‚ because we stay together at the same hotel with Chiefs. And when we go to eat we see each other‚ going to training‚ and they are coming [back].

“So for us it’s just to go on with the business of the day‚ make sure that we don’t lose the game.

“For this last two games if we can just go without losing a match we stand a good chance of keeping our status.

“I just told them that they must just put the pressure away‚ enjoy the game‚ and play and do everything that we agreed on‚ because we are all fighting for the three points at the end of the day.”

All Wednesday evening’s games kick off at 6pm.

Chiefs complete their season against Baroka FC at Bidvest Stadium on Saturday‚ and Sundowns end against Black Leopards at Dobsonville Stadium.

Chippa’s final fixture is against Golden Arrows at Orlando Stadium‚ with all Saturday’s matches played at 3.30pm.