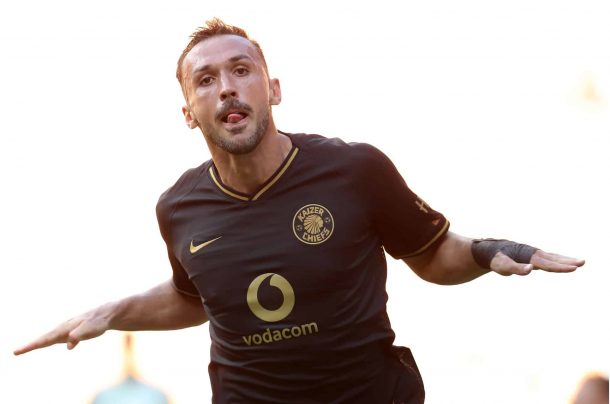 Chiefs ace Nurkovic turns his sights on TTM: ‘Everything we are doing is for AmaKhosi’

Ace Kaizer Chiefs striker Samir Nurkovic has admitted that watching the team struggle to find the back of the net in the four months he was sidelined by a groin injury was very difficult for him to stomach.

Chiefs had a horror start to this season under new coach Gavin Hunt and Nurkovic’s absence only served to sour things further for AmaKhosi as they continued to limp from one poor result to the next‚ with their impotency in front of goal glaringly amplified.

But the Serbian’s return seems to have inspired a change in fortunes for AmaKhosi as in his first start since recovering from the injury‚ he scored the lone strike in Chiefs’ 1-0 win against AmaZulu. He then turned provider in his next match as he delivered an assist in Chiefs’ 2-1 win against Cape Town City a few days later to secure a second win in a row for the first time this season.

“Ja‚ also everyday you can see some supporters [in the streets]‚ obviously‚ and they were all wishing me a speedy recovery and all that stuff. But sometimes you need a little bit of time to get back on the field and you cannot rush something.

“But it is not the same playing without supporters. It is a big difference because they have always been our 12th player on the field‚ in the stadiums‚ and it is harder without them. But the hard work that we are putting in is all for them‚ everything we are doing is for AmaKhosi.”

The eight-placed Chiefs will put their newfound resurgence to the test when they host Tshakhuma Tsha Madzivhandila (TTM) at FNB stadium on Tuesday afternoon.

“We really do not have a lot of time to think about the opponents (TTM)‚” Nurkovic said.

“We have to focus on ourselves and on our play. We have to continue with our good fighting spirit‚ on what we gave the supporters in our last two games [against AmaZulu and Cape Town City]‚ and we have to just keep momentum and keep moving forward.”

Nurkovic conceded that he has seen very little of the side that is languishing second from the bottom on the premiership standings.

“I didn’t [watch them recently] actually‚ I didn’t‚ I was only thinking about ourselves‚ my team’s needs‚ and what we can improve and what we can do better in the coming game [against TTM].”

The Serbian said he was grateful to be back on the pitch after a frustrating period that saw him sidelined while Chiefs gasped for air in the relegation zone at some stage.

Hunt’s post match interviews sounded like a broken record at the time as the goals dried up and countless points were dropped when the presence of a razor-sharp marksman on the pitch could have turned defeats into draws‚ and draws into wins.

“It felt fantastic to be back on the field after a long time‚ after a surgery and four months of recovery‚ training sessions and all that. Ja I’m finally back on the field and I’m really happy to be there actually‚ to help the guys and‚ ja‚” teh Serbian said.

“I mean the doctors and the technical team‚ they helped me with that‚ in that process of four months of recovery‚ the two months of just some easy sessions.

“And then after that with physios and all that stuff‚ we preparing ourselves so that I can feel better so that when I come into to the field I can give one hundred percent.”

“Like I said a million times‚ my job is to be upfront and score goals and thank God I scored that goal [against AmaZulu] in the first game after a long time. The feeling was unbelievable and you I am very happy that I have made my contribution to the victory‚” Nurkovic said.

In the only other match on Tuesday‚ leaders Sundowns host Bloemfontein Celtic at Lucas Moripe Stadium.