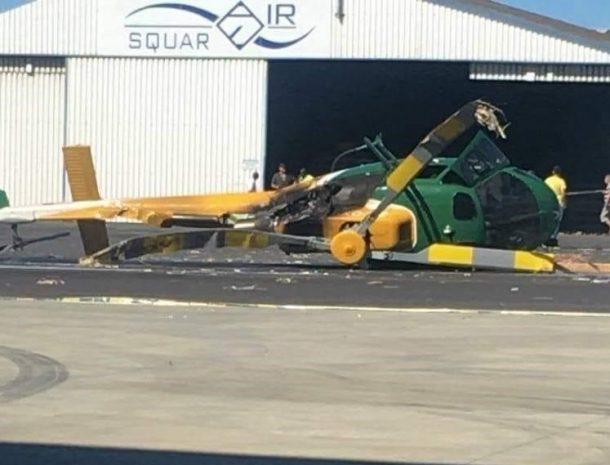 The SANParks chief pilot has come to the defence of the organisation’s airman who crashed a helicopter at the Cape Town International Airport on Saturday.

SANParks announced on Saturday that the Airbus AS350B-3+ (Squirrel) helicopter was damaged after losing control during take off.

The pilot‚ who was flying alone‚ suffered only minor injuries and received medical attention.

The aircraft is based in Cape Town to help with aerial law enforcement and conservation management operations in the Table Mountain National Park and surrounding areas.

After the incident‚ there were various social media posts which insinuated that the pilot‚ who is black‚ was inexperienced.

SANParks chief pilot Jaco Mol said the helicopter accident had been unfortunate and would have a major effect on SANParks’ continued operations.

“But it also saddens me to read the misinformed posts‚ the false rumours and the blatant racial attacks directed not only towards our esteemed colleagues‚ but against our organisation as a whole‚” said Mol.

He said all SANParks pilots were appointed on merit and the organisation had a very high minimum standard for all its aircrew.

“Each and every one of our pilots has in excess of 3‚500 flight hours‚ years of operational experience and impeccable safety records‚” he said.

He said the fact that this was the first serious helicopter accident SANParks has had in more than 10 years and 20‚000 flight hours was testament to the skills‚ experience and professionalism of all its aircrew.

“Our Cape Town pilot who had the unfortunate accident is an extremely experienced former air force pilot with many years experience in the Table Mountain and surrounding areas and abroad‚ flying search and rescue and emergency medical services helicopters.”