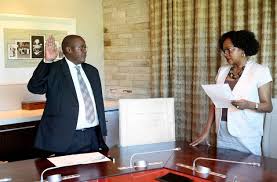 Former Eskom chief executive Brian Molefe was on Thursday morning sworn in as an ANC MP.

This was confirmed by ANC chief whip Jackson Mthembu‚ as he emerged from the party’s caucus which takes place every Thursday.

eNCA also reported that Molefe himself had confirmed to the television station that he had been sworn in as an MP.

National Assembly speaker Baleka Mbete was expected to officially make the announcement in the afternoon‚ ending weeks of speculation.