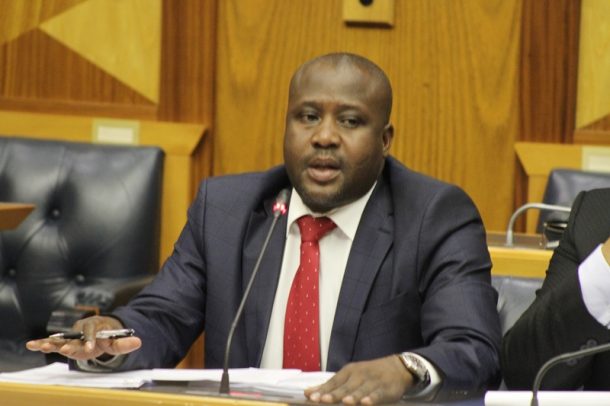 A week before Bongani Bongo was appointed state security minister‚ he allegedly tried to get a key figure investigating state capture at Eskom to halt the probe.

This was in October 2017‚ and Bongo was sitting in the office of Ntuthuzelo Vanara‚ the evidence leader of the commission of inquiry into state capture at Eskom. Bongo told him to “name a price” for his co-operation to delay the inquiry long enough for a “multipronged approach” to derail it.

This is according to Vanara‚ who testified against Bongo on the first day of his corruption trial in the Western Cape High Court in Cape Town on Monday.

Vanara said that during the meeting‚ which took place in his office on the first floor of parliament’s old assembly building on October 10‚ 2017‚ Bongo told him he had been sent by then acting Eskom board chairperson Zethembe Khoza to ask for his “assistance with the commission of inquiry”.

Vanara was supposed to meet Khoza on Thursday October 5 for a preliminary interview to discuss issues which had arisen from e-mails emerging from the tranche of Gupta leaks documents‚ including the reappointment and pension payment of former Eskom group CEO Brian Molefe and the Trillian‚ T-systems‚ New Age Breakfast‚ and Tegeta coal contracts.

The meeting was scheduled for October 3‚ and the next day‚ as Vanara made his way to Cape Town International Airport for his flight to Johannesburg‚ he received his first of three phone calls from Bongo‚ who wanted to know whether he could schedule a meeting with Vanara urgently.

Vanara told Judge President John Hlophe‚ who is presiding over the case‚ that he did not know the number Bongo called from. He said Bongo introduced himself and asked whether he was still in the parliamentary precinct. He told him he was on his way to the airport but fearing he had made a mistake which could jeopardise his security by disclosing his destination‚ he told Bongo he was going to Durban. He proposed that they meet on October 9.

Vanara testified that since his appointment as evidence leader on September 1‚ 2017‚ he had seen and heard “overwhelming evidence of maleficence” during preparation for the hearings‚ which had led to him becoming concerned for his safety. Even the location of his meeting the next day would only be made known to the various parties two hours beforehand.

While he was sitting in traffic on his way to the airport‚ Bongo phoned again‚ this time proposing to meet at the airport. But Vanara said this would not be possible and insisted on sticking to their October 9 appointment.

After Vanara landed in Johannesburg‚ he and portfolio committee for public enterprises secretary Disang Mocumi were driving through Sandton when he asked whether Disang knew who Bongo was.

Just then‚ after 10pm‚ Bongo phoned again. This time he asked whether Vanara’s meeting with the Eskom chairperson was in Cape Town. Vanara said no-one other than he and Mocumi knew where the meeting was going to be held. When Vanara woke up the next morning‚ he had received an e-mail informing them that Khoza had been summoned to an urgent meeting with then public enterprises minister Lynne Brown in Cape Town‚ and that their meeting was cancelled.

On October 9 Vanara received a call from Bongo at 5pm telling him that he had just arrived in Cape Town and asked whether they could meet. But Vanara suggested that he come by his office the next day.

On October 10‚ Bongo ran up behind Vanara‚ who was walking towards his office. Navara invited him in and closed the door behind them.

“He said to me he had been requested by the acting chair of the board [Khoza] for my assistance with the commission of inquiry‚” Vanara testified.

He asked Bongo what he meant by “assistance”‚ to which he allegedly replied: “People of Eskom are worried about being called to the commission of inquiry and that enough evidence would be led and that there would be police officials waiting to arrest them when they walked out the door.”

He alleged that Bongo told him that the commission was then finance minister Pravin Gordhan’s “brainchild”‚ and that Gordhan was conflicted.

“Bongo said the inquiry was affecting a number of campaigns. I was confused. I didn’t understand the relevance of the mention Pravin Gordhan’s brainchild to the commission of inquiry and him being conflicted had anything to do with Eskom people‚” he said.

“I again asked him what was required of me. I even offered him a solution and said that if there was evidence incriminating the board‚ they must resign. Bongo said it would not help the board to resign‚” he said.

“I said‚ ‘I’m sorry‚ I can’t be of assistance.’ Bongo said the inquiry could not proceed and that I must help them to stop the inquiry from proceeding‚” he said.

Vanara testified that he then asked Bongo why he should assist in stopping the inquiry‚ and how.

“He didn’t answer why. I guess it was for the reasons discussed. He said I could fake illness and take sick leave the following week when the inquiry was supposed to start. He said in my absence the inquiry could not proceed‚” he said.

The inquiry was expected to start hearings on October 20 that year.

Vanara testified that the commission had been beset by delays‚ obstacles‚ and blockages by various individuals since it was established in May that year. Its members were frustrated and under pressure because of the commission’s slow progress and Bongo’s alleged request came at a sensitive time.

“I said I could not assist him. I said to Mr Bongo [that] this inquiry was the result of a political decision [and] if politicians no longer want to proceed they must reverse it‚” Vanara testified.

Bongo allegedly agreed with him and said: “You are right‚ what I’m currently doing is I have prepared a petition. I’m mobilising and working with other MPs to sign this petition aimed at forcing Jackson [Mthembu‚ the late minister] — to stop the inquiry.”

“He said if [Mthembu] doesn’t take a decision to stop the inquiry he will then take that petition to caucus to force the decision‚” claimed Vanara.

He said that Bongo made the point that due to Vanara’s “technical expertise” he could assist in stopping or at least delaying the inquiry.

“I said I’m not going to be part of interfering. My role is insignificant. He disagreed and said ‘without you the committee is dysfunctional’. I said there is no way I can assist‚ if you want to stop it‚ do it yourself‚” said Vanara.

“He would receive the money and hand it to me‚” he said.

“It was at that stage that I told Mr Bongo that my conscience would not allow me to accede‚” he said.

Vanara testified that at this point he was shocked and “weak on my feet”.

“I told him the meeting is over. He told me to consider the offer. I said there is nothing to consider‚” said Vanara.

He let him out‚ closed the door‚ and stood alone in his office pondering what had just transpired. In the passage he could hear Bongo speaking with a colleague next door.

“I stood there and asked myself what has just happened‚ what do I do? This is too big for me to keep to myself‚” he said.

Vanara said he could not concentrate on any work after the meeting and decided to go to a nearby restaurant. From there he contacted one of the senior managers at parliament who had originally approached him and asked him to take up the evidence leader position at the commission of inquiry‚ Advocate Modibedi Phindela.

He told Phindela and another state witness what had happened. He found out that Bongo was a lawyer and one of Phindela’s former law students when he was a lecturer at the University of Limpopo.

The next day they reported the incident to parliament’s then acting secretary Penelope Tyawa‚ who advised him to write a written report‚ which he submitted with a letter on October 26.

Bongo would be appointed as state security minister on October 17.

He said the delay in writing his complaint was because of his preoccupation with the commission of inquiry‚ which he made his priority.

He claimed that after Bongo’s advances he received a letter from Brown. He said he told Brown that he found her level of co-operation with the commission of inquiry “obstructive”.

An official criminal complaint would only be laid by DA MP John Steenhuisen the next year‚ an issue which became one of several avenues of attack for Bongo’s legal counsel during cross-examination.

The case continues on Tuesday when Bongo’s cross-examination will continue and when a full report of the defence’s argument will be published.