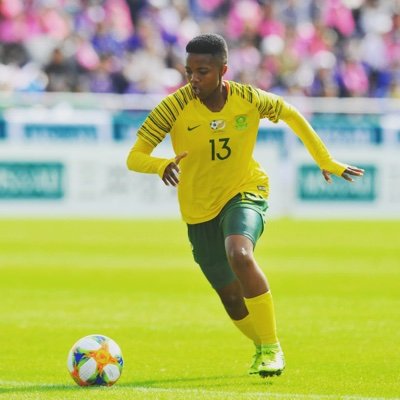 While South African footballers are twiddling their thumbs under lockdown at home due to Covid-19‚ Eastern Cape-born Banyana Banyana star Bambanani Mbane is tearing the goal net apart in the Balarus Premier Women’s League.

Born 24 kilometers from the Lesotho border in Sterkspruit‚ the 29-year-old defender has won hearts at her newly promoted FC Dinamo Minsk‚ who aim to rival their more established neighbours Minsk FC.

The former Bloemfontein Celtic Ladies’ star has already rattled the net on three occasions from four matches as Belarus continues to defy the global trend by playing matches in packed stadiums despite the pandemic.

Mbane is having the time of her life in the Belarus capital and says while she joined the team as a central defender‚ her coach has not stopped singing her praises since he converted her into a right-back.

“I now take free kicks and corners and also penalties‚ I am really enjoying my game. The three goals I scored was a penalty‚ a header and a long range shot outside the box‚” said Mbane.

She linked up with Banyana teammates Letago Madiba and Rachel Sebati who also fly the South African flag high in the bitterly cold eastern European country.

Mbane said the chilly conditions of Sterkspruit and the equally bitter cold Bloemfontein where she had a stint with Celtic are nothing compared to Minsk.

“Actually‚ it is much better now. When I arrived in February it was a culture shock – I could not believe that people played football under such conditions‚ it was freezing‚” said Mbane from her apartment in Belarus.

“I am getting used to it now and we are moving to summer‚ so it is okay now.”

Belarus is the only country in Europe where football continues to be played without disruption despite the pandemic that has floored major sporting activities around the world.

Local giants BATE Borisov lifted the Belarus Cup to the heavens at the weekend after edging Dynamo Brest in front of 5‚000 in the men’s premier division.

Belarus President Alexander Lukashenko has been bullish about the country’s response to the deadly Covid-19 disease.

As the pandemic started to peak worldwide in March‚ Lukashenko was quoted as saying “it is better to die standing than to live on your knees”.

Mbane said she hopes her life-changing overseas move could spur on young girls to dream of emulating her.

“I am not representing myself only here‚ there are many girls back home who want to be in this position‚ and my being here must open the doors for them.

“The coach said something profound‚ that if Bambanani is such a good player maybe the club should look to South Africa for more players‚ and that already is a plus for women’s football‚” said the player who introduced herself as “Juice”.