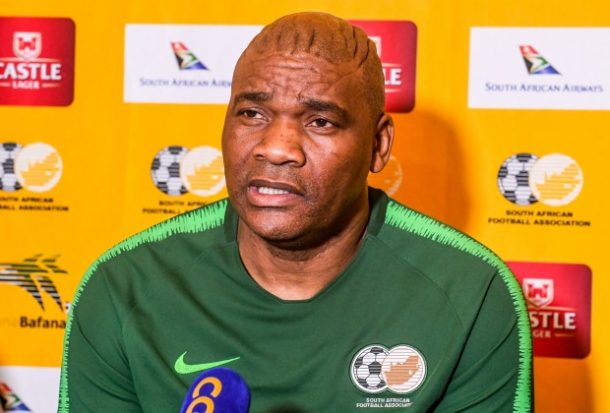 Molefi Ntseki has his back against the wall and his growing list of critics are starting to question whether the increasingly pressured Bafana Bafana coach is the right man to lead the national team or not.

Bafana’s lacklustre performances in recent friendly internationals against neighbours Namibia and Zambia have emboldened the doubters and they fear the worst ahead of next months back-to-back Africa Cup of Nations qualifiers against Sao Tome and Principe.

The national team’s laboured display in the 1-1 draw with Namibia on Thursday last week and Sunday’s deflating 2-1 defeat to Zambia‚ both at home in Rusternburg‚ have only served to heighten the pressure on Ntseki and lower the confidence in the side.

While confidence in the embattled mentor is waning with each passing day‚ he insisted that the team will be ready when the more important business of the qualifiers resumes next month.

“We will be ready‚ we will be ready because locally the PSL is starting next weekend‚ and I think the coaches and the physical trainers will prepare the players‚” he said.

“We [Bafana] can only benefit from that preparation on the physical side of it. When it comes to the tactics‚ they [the players] responded very well [in the two friendlies] and they were good.

“It means going to Sao Tome and Principe [in the qualifiers] they will be ready physically because what we saw [on Sunday against Zambia] is that tactically we are at a level we want to be.

“But we can’t have tactical endurance because of the physical level that we are at. I think come Sao Tome and Principe we will be ready to compete‚ and compete to win.”

Ntseki reiterated his belief that Lyle Foster’s injury in the second minute of the friendly international against Zambia contributed to the defeat and unravelled his plans.

“Ja‚ in terms of performance we are not happy with ourselves‚ but there are so many factors that contributed to this sort of performance‚” he said.

“One‚ you lose a striker in the first two minutes of the game and it comes out as a very big setback because you have to juggle around tactically.

“The biggest challenge we have is that according to our data analyst‚ our players are not at a level where you can 90 minutes. Most of them [the players].

“So we struggled to put in a striker and we had to put in another midfielder and played [Thabiso] Kutumela as a striker. It means as early as the third minute of the game our tactics were not as we planned.”

Ntseki will be well aware that patience is running thin and the ranks of those who believe the South African Football Association blundered by appointing him as Briton Stuart Baxter’s replacement in August last year continues to swell with each passing day.

Bafana’s showing in the last few days will have given the cynics a louder voice and the under siege mentor‚ who was assistant coach to Shakes Mashaba and Baxter before ascending to the hot seat‚ has the next few weeks to iron out the many kinks that were evident against Namibia and Zambia‚ and more importantly‚ get his team ready for the resumption of the Nations Cup qualifiers next month.