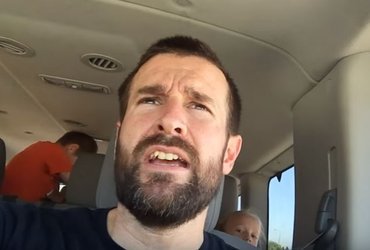 Another door closes on anti-gay pastor

Gay activists have hailed the decision by Botswana to give homophobic US pastor Steven Anderson the boot as a victory for the country’s constitution.

The Botswana government announced yesterday that Anderson had been declared a “prohibited immigrant” after featuring on radio station Gabz FM, where he criticised drunkenness and alcoholism.

Anderson also referred to a gay guest as “disgusting”, saying that he should be killed for his sexuality.

Anderson arrived in Botswana for a “soul-winning” event just days after he was banned from visiting South Africa over hate speech.

Gigaba said last week it was clear that Anderson, who had previously advocated violence against homosexuals, could not make a positive contribution to the country.

When Anderson was banned, he said on his Faithful Word Baptist Church’s Facebook page: “I feel sorry for people who live in South Africa, but thank God we still have a wide open door in Botswana”

The Botswana decision comes after a petition asking the government to ban the pastor gathered more than 2,600 signatures.

Bradley Fortuin, a representative of Lesbian, Gays and Bisexuals of Botswana, said yesterday: “This is a reflection that the government does take into account the constitution and the protection of the people of Botswana .”