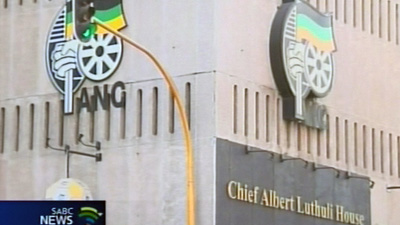 That’s the warning issued by the ANCYL “to overzealous fellows…mobilising people with the sole intention of causing disunity in the organisation”.

Mkhize said these “stooges…have gone to the extent of mobilising non-South Africans to fraudulently join the organisation in order to (fan) disorder and chaos”.

Mkhize said that “people can demonstrate”‚ but said “occupying Luthuli House is a no no”.

“The ANCYL will defend the ANC from uncultured behaviour‚ including those that may be tempted to destroy its property‚” said Mkhize.

“We alert all those that will attempt to occupy Luthuli House that this will not happen. People can demonstrate but occupying Luthuli House will never happen.”

He noted that the “call and mobilisation” had been made “by some citizens and non-South Africans who are purporting to be members of the ANCYL and the ANC”.

“True members of the ANC will know that they should attend the mass meetings being called through out the country to air their views‚” said Mkhize.

These “true members” could not be foreigners‚ Mkhize said‚ as the “constitution of the ANCYL and the ANC only allows membership for South Africans”.

“Those who are not South Africans must know that the forms they downloaded from the internet and filled (in)…does not make them members.”