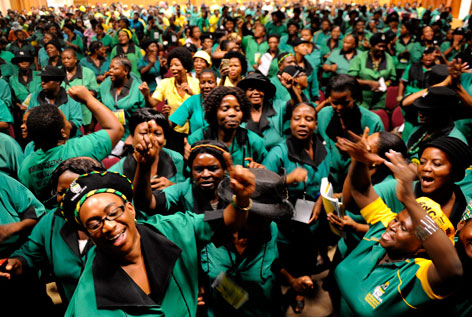 If there is anyone who is capable of leading Tshwane, it is Thoko Didiza.

This is according to the ANC Women’s League (ANCWL) who called on ANC members to rally behind Didiza.

Chaos has erupted in Pretoria following the announcement of Didiza as the ruling party’s mayoral candidate for Tshwane in the upcoming local elections.

Residence in Mamelodi, Atteridgeville, Soshanguve and Mabopane took to the streets to show their discontent and called on the ANC to leave the current mayor, Kgosientso ‘Sputla’ Ramokgopa as the city’s candidate.

“We want to believe that all the processes of the ANC were adhered to and we wish to call upon all our comrades especially women to support and rally around all mayoral candidates as announced by the African National congress. This includes comrade Thoko Didiza, who has served and committed to the ANC, if anyone is capable of leading Tshwane it is comrade Didiza,” said ANCWL Secretary General, Meokgo Matuba.

The ANCWL condemned all forms of violent protests in the country with regards to the mayoral candidates. With particular emphasis on the Tshwane protests.

They reiterated that they will not back down on their call to see a female candidate as the next president of the ANC.

“Out of 8 municipalities three mayoral candidates are women, including Thoko Didiza,” said the ANCWL on Wednesday.

Matuba went on to mention that Thoko Didza served with President Mandela and President Mbeki.

“The Young Woman’s desk was so instrumental in the process of lobbying for women mayoral candidates. We want to ensure that young women are better equipped and empowered to take the baton and lead.”