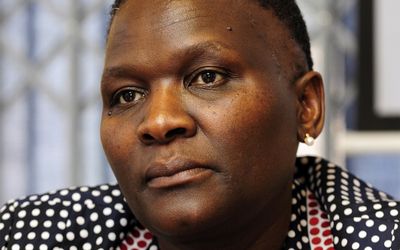 The Claassen Board of Inquiry into suspended police boss Riah Phiyega’s fitness to hold office has ruled in favour of Association of Mine and Construction Union (Amcu) president Joseph Mathunjwa’s application to be admitted as a witness agitating for Phiyega’s removal from office.

The board of inquiry chaired by Judge Neels Claassen reconvened in Pretoria on Wednesday.

Represented by Advocate Dali Mpofu‚ Mathunjwa has submitted an affidavit on behalf of Amcu members injured during the 2012 Marikana police shooting that left 34 miners dead.

There was no objection to the admission of Mathunjwa’s affidavit from evidence leaders or from Phiyega’s defence team.

Mpofu said Mathunjwa was asking to be admitted in his capacity as a citizen and president of Amcu.

He apologised for the late application‚ saying this was not done to disrespect the Board but was due to logistics in acquiring relevant material.

Mpofu said Mathunjwa was a central figure in the alleged concealment of information on when and why the fateful decision to disarm and disperse the striking miners was taken.

He said the accepted statement was that the decision was taken during the police National Management Forum on 15 August 2012 and implemented the following day.

On the alleged political pressure exerted on Phiyega‚ he said he would submit that this flowed from then Lonmin shareholder and deputy president Cyril Ramaphosa to then minister of police Nathi Mthethwa to Phiyega.

He said the question that must be asked was whether Phiyega bowed to political pressure and if she did‚ would the public want a police commissioner “who has breached one of the fundamental constitutional prescripts and lack the ability to resist political pressure or unlawful interference”.

He said the constitution empowered Phiyega to refuse to take an unlawful order.

Mpofu said he would submit the reason “we have legislative provisions for this type of inquiry is because of seriousness of the issue‚ dealing with a national commissioner and not merely a disciplinary process between an employer and employee”.

He added that the employee and employer scope was too narrow.

The Marikana inquiry concluded that the decision to disperse and disarm the miners was taken at a meeting of the police’s national management team.

The inquiry’s terms of reference include establishing whether those who took the decision to implement the “tactical option” ought to have foreseen the tragic and catastrophic consequences.

It will also try to establish whether Phiyega‚ acting with other police leaders‚ or alone‚ misled the Marikana inquiry by concealing that top police management had made the decision to implement a “tactical option” the day before the shooting.

President Jacob Zuma established the board of inquiry last year following recommendations by Judge Ian Farlam in the Marikana Commission of Inquiry report.

The room is packed to capacity with Amcu members clad in Amcu T-shirts. Earlier the group sang and chanted anti-Phiyega slogans at the main entrance. Mathunjwa is also present.